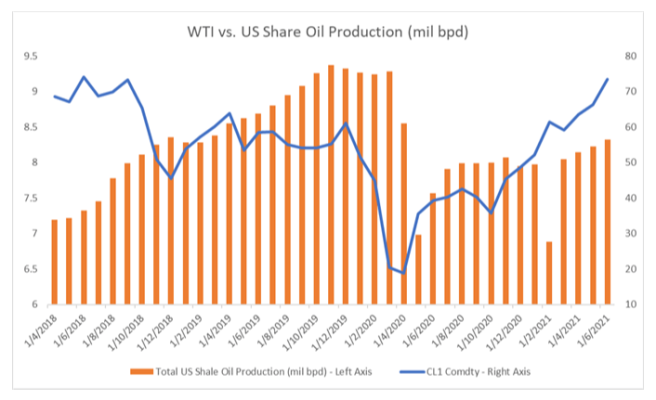 After falling 3.3% yesterday, crude oil prices fell further during Wednesday's APAC session. After briefly reaching a six year high of $76.95 on Tuesday, prices quickly fell after OPEC+ members failed reach an agreement to increase supplies. Some market participants expect a deal to take place in the coming weeks, as the oil cartel seeks out to meet growing global fuel demand and stabilize prices.

Investors are concerned that the recent spat between Saudi Arabian and United Arab Emirates could spark a price war among OPEC+ member countries if the current production cut agreement is not renegotiated.

The sharp rebound in energy prices has encouraged America's shale oil producer to increase their capacity in recent months (chart below). According to JPMorgan Chase's most recent report, current oil prices are well above the full-cycle breakeven price for shale of $46 per barrel. This makes American shale oil exploration more profitable, and could encourage more supply in the future. An important increase in shale oil production could neutralize a temporary stall in the output rise from OPEC+, and limit the upside potential for oil.

Today's prices were affected by a weakening market sentiment and a stronger US Dollar. The threat of the Covid-19 virus' Delta variant is casting doubt over the fragile and uneven recovery. Rising safety demand is evident in a rally in US Treasury Notes and a stronger Japanese Yoen.

The demand side of the equation, US crude inventories are down for six weeks straight (chart below). This is due to tighter market conditions as refiners increased capacity to meet summer driving season demand. Energy Information Administration (EIA), will publish its weekly oil status report today. It is expected to have a draw of 4.0 million barrels. Prices could be boosted by a larger than expected fall in stockpiles. However, a smaller draw or rise could lead to the opposite. 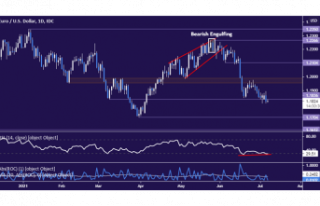 Euro May Fall vs. US Dollar as FOMC Minutes Drive...