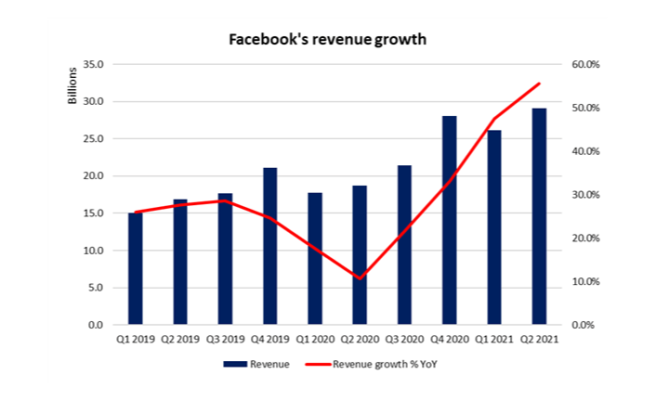 Facebook will release its Q3 financial results after the market closes on 25 October. As of the writing of this article, earnings per share are expected to rise by 32.1% to US$3.17 from US$2.40 last year.

The impact of Apple's anti tracking initiative on Facebook's business will be carefully evaluated for the earnings release. Management has previously warned of a greater impact of iOS updates in Q3 than the previous quarter. Recall that Apple has already implemented privacy controls to prevent digital advertisers from using iPhone users' data for advertising purposes.

Although the dropout rate for data collection remains unknown, the Q3 results could provide some insight into the impact on Facebook ad effectiveness. There may be some relief in the numbers for average price per advertisement and delivered ads.

A lower base effect may be revealed in the 2H 2021 earnings than in the year prior. This is despite Facebook seeing a significant increase in sales in 3Q 2019 and 4Q 2020 due to strong business advertising spending recoveries. The quarters ahead may see sales and earnings growth continue to normalize. Management's outlook will also be considered.

Recent negative news about Facebook, which came from a whistleblower regarding the dangerous effects of Instagram for young people, has also been reported. These concerns may require management attention. While the debates about the issue could drag on into the end of the year, Facebook's subsequent adjustments to its platform and business processes may alleviate such concerns. This could be evident in past data breaches. Markets tend to overlook these short-term noises and continue to grow their daily active users for Facebook’s 'family' products.

The US 10-year Treasury yield may pose a risk to Facebook's share price. The 10-year yield has broken out of its consolidation period in September and is now likely to rise further, which could limit the valuation multiples for high-growth businesses.

Since its 50-day moving mean (MA) failed in mid September to hold prices up, Facebook shares have been trading in a near-term downward channel. Although prices are still trending downwards, the relative strength indicator did not indicate a lower low lately. This suggests that there may be some easing in downward momentum. The 200-day MA was retested with a bullish candlestick. This will continue to be a key support MA line. This could potentially raise prices to retest US$337.00 near-term resistance, which has held prices down on three previous occasions. 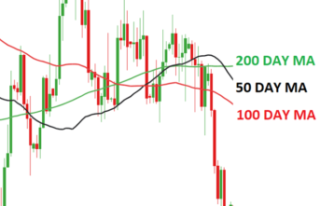