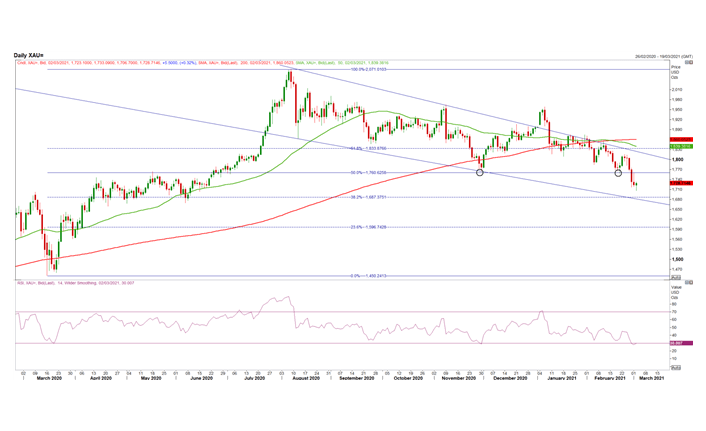 A reality check for gold bulls after the precious metal listed its worst monthly performance since November 2016, having fallen over 6 percent for February. However, those searching for a reprieve may be left disappointed since gold can be in the middle of a seasonally tough time. The sizeable rally in global bond yields and also the latest bidding at the greenback has notably reduced the appeal for holding gold and consequently threats remain tilted to the downside.

GOLD NEEDS POWELL TO ADDRESS RISE IN YIELDS FOR REPRIEVE
That said, with the ECB and RBA tackling the increase in nominal yields, the latter aggressively restarting their bond purchases, the focus will be on the slew of Fed speakers and in particular Chair Powell on Thursday regarding whether they will address the growth in yields ahead of the blackout period. The current stance has been that the Fed aren't worried about the rise and signalled that this is mainly in reaction to economic optimism, should Powell reiterate this message, the US 10Y is likely to retest 1.5%, raising the chance that gold moves into the emotional 1700.

BULLS LAST LINE OF DEFENCE
In the brief run, should the Fed remain unconcerned over the growth in returns, I struggle to determine much to remain optimistic about for gold. On the technical front, the more precious metal is at a well-defined downtrend using the rest below key support at 1760 placing gold in a new selection. Support resides at 1690-1700, which may function as bulls final line of defence with a close underneath opening the door to 1650.

On the topside, a close above topside resistance at 1760 (earlier support( currently immunity ) will be necessary to change the technical landscape. Gold is also oversold on the daily timeframe, while a bullish divergence on the 4 hour time period indicates that declines may slow out of here and perhaps underpin slightly. Nevertheless, eyes will be on the bond market as to whether gold could muster some aid with comments from Powell key into the short-term outlook. 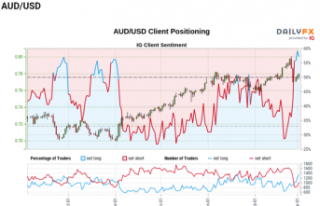