Today at 2pm brings the June FOMC rate decision along with the broad expectation appears to be for the lender to punt on pretty much every item they can. There might be a small moderation in rate predictions, with a possible 2023 increase highlighted in the scatter plot matrix compared to the previous expectation for that very first increase to be in 2024. 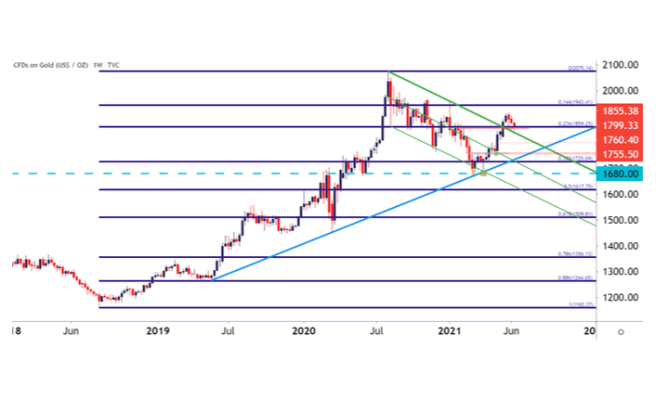 However, outside of this and given the moves seen in danger markets after a week's inflation print, it might seem that many market participants are anticipating QE to stay in full effect with no signaling towards the contrary.

On the above graph, you'll probably notice that prices are now testing the 23.6% Fibonacci retracement of the 2018-2020 key move. This plots in 1859.25 and for the last month, this has been a vital level for Gold prices.

When bulls were pushing the breakout from the bull flag, the immunity side of that formation was confluent with this cost. And a few weeks after, it came as support but buyers were unable to extract the large, rather, getting caught at resistance around the 1900 psychological level.

Since then prices have reverted right back to the support and this zone has held the lows through the first 2.5 days of the week, contributing into FOMC.

Adding a Fibonacci retracement into the recent significant move spanning from the April 29 swing low up to the May high, and also the 38.2% retracement lines very closely to the longer-term retracement looked at above. This level is currently at 1855.18 and together with 1859.25, generates a confluent support zone that is currently holding cost.

Beneath this, the 1836 level sticks as it's the 50% mark in the shorter-term transfer.

Above current prices, there is a short-term spot of immunity around 1870, and 1878 comes into play since the 23.6% retracement of this shorter-term move. The next level then is at 1893, after which the 1900 psychological degree comes back to play. 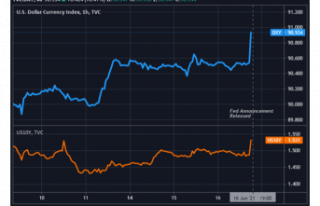