The US Dollar Jumps as Energy Soars, Equities Struggle. Is the USD poised to make a new high?

On safe-haven buying, the US dollar gained some ground over all majors. As markets became more risk-averse, the commodity currencies AUD and CAD, NOK, NZD lost more ground than other currencies. 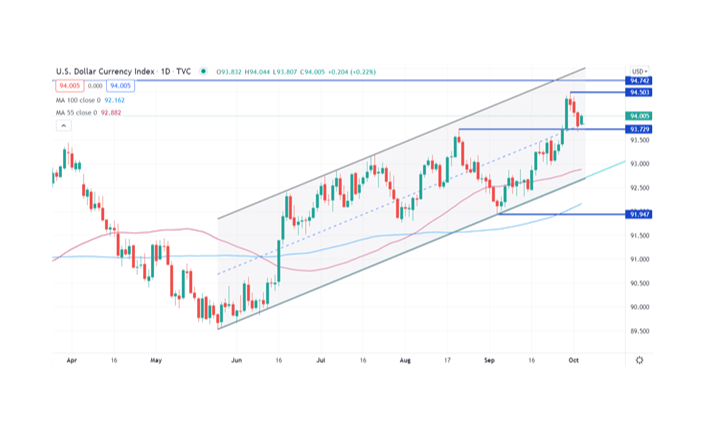 Crude oil has maintained levels that are close to 7-year records in Asia, as new energy concerns arise. India is the latest to report blackouts due to coal shortages. Yesterday's meeting of OPEC+ saw a commitment to adding 400,000 barrels of coal per day. The markets wanted more and this resulted in a squeeze higher.

In the US, Nasdaq was 2.1% lower than in the previous session. This gave Asian markets a soft edge. APAC equity were generally lower with Japan's Nikkei 215 and South Koreas Kosdaq both falling over 3.5% at the same stage.

Mainland China is still on vacation and Hong Kong markets were generally stable, with the exception of the tech sector. Fantasia, another property company, announced this week that they could not pay a bond.

Concerns about energy supply and liquidity seem to be increasing the number of liquidity issues in China's property sector. There has been speculation that the PBOC may reduce the requirement for reserve ratio (RRR), when they return from holiday next week.

AUD/USD were slightly lower after the RBA monthly meeting. The cash rate and 3-year bond rates targets were kept at 0.10%. Monetary policy was not changed. The central bank maintained a weekly rate of AUD 4 Billion for government asset purchases, at least through mid-February 2022. The trade surplus of Australia for August was AUD 15.1 million, which is well above the AUD10 billion market expected.

The US will soon see PMI, trade and ISM numbers. Tomorrow's RBNZ meeting will discuss a rate increase that was widely expected but which has been questioned recently as Covid-19 numbers climbed.

Since its May low, the US Dollar index (DXY), has been in an ascending trend channel. Resistance could be found at the recent high of 94.503 or at the September high of 94.742 last year.

The previous resistance level of 93.729 may be a pivot point that could provide support. Potential support levels include the ascending trend line at 92.75 and the old low at 91.947. 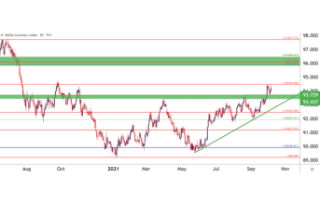