US Dollar threatens to breakout ahead of key CPI release

Tomorrow at 8:30 a.m. et, the US Dollar's big driver will be revealed. Tomorrow at 8:30 et, we will get the latest CPI numbers for the United States. This release is the last before the FOMC's November rate determination. At which point they are expected to announce that the tapering of asset purchases has begun. 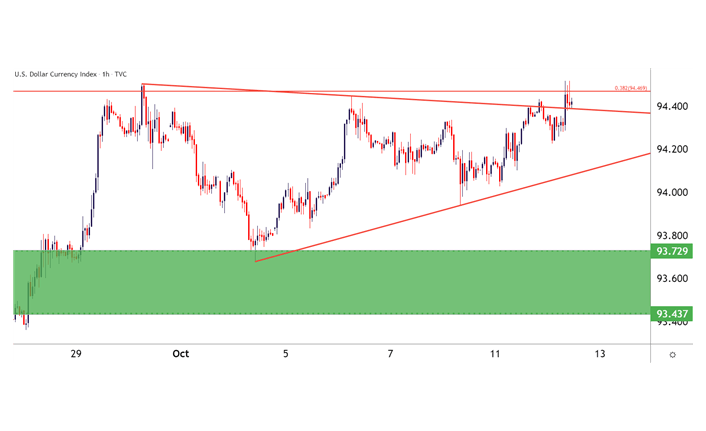 The Fed opened the door for earlier-than-expected rate hikes at their last meeting in September, but they also avoided a taper announcement while saying that they wanted to see some additional progress with employment numbers. Even though NFP was disappointing, bond market continue to expect the Fed to change to a more loose policy in the short-term.

This has led to two clear themes in the FX world: US Dollar strength, and Japanese Yoen weakness. The result was a strong breakout of USD/JPY which saw the pair reach new two-year highs. The Fed's fears of inflation being 'less transitory" than they had anticipated in the next months may also be behind this. Tomorrow's release of CPI numbers will bring a big driver to the market.

Bulls in the US Dollar seem to have lost patience waiting for tomorrow's inflation release. Although the October trade began with a symmetrical triangle that was built over the first 10 trading days, this combination creates a bull pennant. Buyers are pushing the price higher to get sellers at Fibonacci resistance at the level of 94.47.

This is the 38.2% retracement from the 2020 selloff. It has held the highest levels in the US Dollar so far as traders prepare for the Fed's pivot.

To give you some context, take a look at the chart again. You will see some additional levels. A series of resistance levels are located above the current price action at the DXY 96 handle. If this trend continues, it is possible to monitor these levels for long-term targets. The current issue is more urgent than resistance at 94.47. It remains to be seen if bulls can overcome this. This suggests breakout potential for the Greenback ahead of tomorrow's CPI report. Solidarity Fund: when is September 2021?