A pair of athletic shoes in 1972, one of the first produced by Nike, has been awarded to 437.500 dollars on Tuesday during an auction in New York organised by S 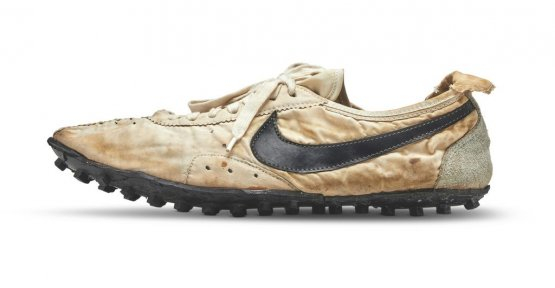 A pair of athletic shoes in 1972, one of the first produced by Nike, has been awarded to 437.500 dollars on Tuesday during an auction in New York organised by Sotheby s. It is a record hitherto never attained for a pair of sneakers.

" ALSO READ - The vegan have their sneakers

This pair of running shoes on foot Moon Shoes was designed by the co-founder of Nike, and track coach Bill Bowerman. It was intended to the competitors in the american selection trials for the Olympic Games in Munich in 1972. Among the twelve known copies, this pair is the only one that has never been worn. Before the start of the sale, it was estimated to be between 110,000 and $ 160,000.

Miles Nadal, the recipient of a pair of Moon Shoes , is a canadian entrepreneur aged 61, who was scheduled to exhibit these shoes in his private museum in Toronto, dedicated to the cars collections. During this auction, Miles Nadal has also made the acquisition of the 99 other pairs of shoes on-sale, for a sum of $ 850,000.

" ALSO READ - Nike accused of infringement by Indians of Panama

The previous record was held by a pair of Converse than the legendary Michael Jordan would have worn in 1984 in the final of the olympic tournament of basketball in Los Angeles. It had been auctioned in 190.373 dollars in 2017, at a sale in California.

1 Children without a screen, and a thriving market 2 Ten trades exercisable to distance that pay at least... 3 The French will be able to pay their taxes at the... 4 What are the flagship products in the summer of 2019... 5 How émojis have conquered the professional exchanges... 6 Are you sure you know everything that sell the office... 7 JO 2024 : no less than forty works to be performed,... 8 The subscription takes the music market 9 Tax Gafa: Trump denounced the stupidity of Macron... 10 Penalized by Nissan, the net profit of Renault falling...

Children without a screen, and a thriving market