Hong kong: flights scheduled on Monday, cancelled due to an event 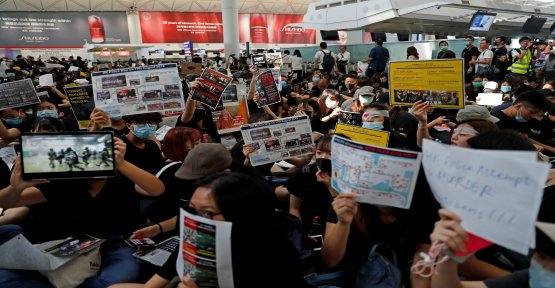 The airport of hong Kong has announced the cancellation Monday of all flights in departure and arrival due to the extent of a manifestation in its main terminal. The airport authority said: "With the exception of flights for which registration is completed and arriving flights that are already en route to hong Kong, all other flights had been cancelled for the rest of the day."

" ALSO READ - hong Kong: why the bomb of inequality has finally exploded

This is a major decision for this airport, the scene of an impressive sit-in since Friday. "From the information that I have communicated (...) 5000 protesters were in the enclosure of the terminal," said Kong Wing-cheung, a public relations officer of the police, at a conference on Monday.

He added that the permission to gather in the arrivals halls had been given by the airports authority and not by the police. But he was then accused of to block the departures. "Protesters also went in the departure hall, preventing some passengers from access to the regulated area and exercise their individual freedom, that of climb on board and take their flight," he said.

The authorities have stated that they were working to reopen the airport here Tuesday morning at 6: 00 (22: 00 GMT Monday), but hundreds of protesters remained in the arrival hall in the evening, giving no sign of wanting to leave.

Several airlines have taken measures to cope with the cancellations of trips. The american United airlines calls to check the status of your flight and "leave early to ensure that [its passengers] have enough time to get to the airport and do the check-in formalities and security". Air France indicates that passengers wishing to change their travel will be able to reschedule without fees.

The protesters present at the airport, they came to "welcome" and raise awareness of the foreign visitors to their mobilization, with songs, slogans and a distribution of leaflets explaining the meaning of the demonstrations, pro-democracy, which hit the city since June . As soon as we get past the customs, the visitors pushing their luggage carts discover a crowd dressed in black, often smiling, their tending of the leaflets, forming a guard of honour to the travelers around the world.

But on Monday, the crowd has grown, and the tone has changed, the demonstrators denouncing almost exclusively on the police violence. In fact, the police fired Sunday tear in the shopping streets, protesters ripostant throwing bricks, or even, in sprinkling the forces of law and order within a metro station with fire extinguishers or hoses.

An official with the government of hong kong has announced that 45 people had been injured in the clashes, including two in a serious condition. Among them, a woman suffers a severe injury to the face, after likely being hit by a projectile in a bag (a bag filled with balls of lead).

Their demands are: resignation of Carrie Lam, the head of the local government, pro-Beijing, the election of a successor by direct universal suffrage, and not his appointment by Beijing, as is currently the rule. They also require an investigation into the violence of which they accuse the police and the permanent abandonment of a controversial bill that would allow extraditions to the Continent.

" ALSO READ - hong Kong: hundreds of protesters at the airport to "welcome" the visitors

This is not the first time that flights are suspended at the airport in Hong Kong. But these are, in general typhoons that lead to such radical measures. Internationally recognized for its efficiency, the airport of hong Kong was the eighth busiest in the world in 2018, with 74 million passengers.

" The protesters "are trying to destroy hong Kong" (Carrie Lam)

1 Battle for the control of Osram, a leader in lamps... 2 The credit card of the asylum seekers at the centre... 3 Thomas Cook badly in need of money 4 Drouot, in the back room of the auction 5 Married for 26 years with Pernod Ricard, Cubaron the... 6 A tobacconist paris accuses the PMU of having stolen... 7 Nixon at Trump, a half-century of imperialism, bellicose... 8 In the Île-de-France, the CGT is critical of the... 9 Employee Engagement – 4 Simple Tips to Boost Worker... 10 The guardian angels of the gare du Nord train station...

Battle for the control of Osram, a leader in lamps...