In the Île-de-France, the CGT is critical of the quality deplorable of the new suburban trains

The CGT Railway workers is at war against a new model of trains in the Ile-de-France, denouncing its "quality deplorable", to the chagrin of the manufacturer 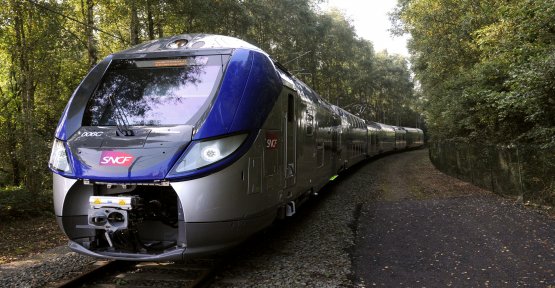 The CGT Railway workers is at war against a new model of trains in the Ile-de-France, denouncing its "quality deplorable", to the chagrin of the manufacturer Bombardier, for which the hardware is "fully compliant". Built by Bombardier in northern France, these new trains Regio2N circulating on the line R which connects Paris to Melun and Montereau (Seine-et-Marne), or Montargis (Loiret). Their supplies had already been delayed earlier this year, after the defects.

For the union, the trains are not at the level of : the CGT is the many problems of catenary to the arrival on the sidings and points especially two incidents "where one loses the elements of security". A shock to the front of the train has, in particular, caused a short-circuit, preventing the trigger immediate signal alert radio, which warns all the other trains in the area. The union has, therefore, multiplied the human rights alert -a call is relayed by up to Toulouse, where the movement of TER was disrupted Tuesday, prompting the management to consider the installation of painting and insulation to provide the drivers of portable radios and distress beacons.

"We have a rate of failure and an incident rate that is much higher than elsewhere" with this train arrived in 2017 in the region, said Wednesday AFP the general secretary of the syndicat CGT des cheminots de Paris-Gare de Lyon, Berenguer-Cernon. "Is it that Ile-de-France Mobility (which manages transport for the region) does not put a strain of crazy has Bombardier is that these trains will be provided in time and in time?", interviewed trade unionist, believing that "the quality is not at the rendez-vous".

These charges are however rejected by the canadian manufacturer, which promotes its products. The train that runs in ten French regions since 2014 has "proven performance", argues Laurent Bouyer, the president of Bombardier Transportation France. "Today, it has achieved its objectives of reliability, which have been contractually validated by the SNCF," says the officer. According to him, "the SNCF is satisfied that this material" that was "developed under (its) responsibility and fully validated with all actors of the SNCF" -including managers-for traction and drivers.

"We were faced with a situation both of heat and of accidents due to repetition, which may have affected the more Regio2N", which "may be generated, in this summer period, a little stress in drivers. But whatever the nature of the accident, the train remains completely independent in its functions of safety," insists Laurent Bouyer.

The SNCF defends it as his own material. "Each unit received is the subject of an audit dramatically its compliance to the specifications", note-t-on of the SNCF, where it readily evokes the "shortcomings of youth" of the material. And regularity on the R line has improved since the introduction of the new trains are added. "Of course, at any time, the safety of circulations has been called into question," insisted a spokesman for the company.

This is not the first time that the trains Regio2N find themselves under the spotlight. As early as December 2017, the union Sud-Rail stressed material defects affecting the quality of the network : "We believe that the Regio 2N is not a rame adapted to the dense area with many stops and many passengers carried", warned the organization.

1 Employee Engagement – 4 Simple Tips to Boost Worker... 2 The guardian angels of the gare du Nord train station... 3 A parliamentary alert on the other debt of the State... 4 Argentina : under pressure, Macri multiplies gestures... 5 Hong kong, a tax haven essential for China 6 Hong kong : under pressure, the general director of... 7 Taxes : who are the French who suffer most from a... 8 The cost of student life is growing again this year 9 The cabinet Valtus began its international development... 10 Cocoa: Korean Messenger launches Klip