The French Office for immigration and integration (OFII) has postponed to November 5, the entry into force of a reform of the credit card of the asylum seekers, 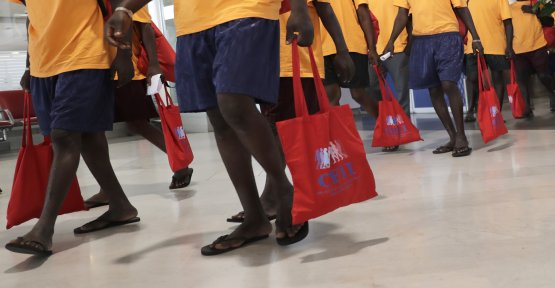 The French Office for immigration and integration (OFII) has postponed to November 5, the entry into force of a reform of the credit card of the asylum seekers, after a controversy generated by the social actors who see it as a way of "rotting life" of newcomers.

" ALSO READ - How Trump to refer asylum-seekers in Guatemala

Announced in the middle of summer, on 23 July, by an e-mail to the managers of care institutions for migrants, the change should be a simple technical manipulation: the card, which is paid every month an Allowance for asylum seekers (ADA), was going to spend the 5 September as a means of cash withdrawal to a card only payment, but the amount of the ADA does not change.

The associations and the institutions concerned, they have immediately perceived a political manoeuvre designed to deter the use of this aid paid currently to 151,000 people, for about 42 million euro monthly, as well as a measure that goes against the needs of asylum seekers.

In the first place, denounced by the end of July the associations regret the lack of consultation, the new operation with 25 monthly payments allowed (and 50 cents per payment charged beyond) runs the risk of depriving the users of liquidity for "acts of daily living", such as the purchase of a loaf of bread in bakery or access to laundry facilities.

Since then, the pressure for the OFII to retreat was not released. The body, under the supervision of the ministry of the Interior, announced on Monday shifted to 5th November, two months to the day, the implementation of the reform, and given "additional time for operators (...) so that they can equip all the structures in the terminal of payment".

"The ADA does not go down, it doesn't change anything on the amount. Ca has nothing to do with cost savings", has challenged Didier Leschi, director of the OFII, which explains rather the reform by a determination to be pragmatic: "asylum seekers are in trouble when it has less than 10 euros on the card, as they cannot remove it. Now, for some, 9 euros this is not negligible, it may be up to 5% of the allocation."

only Allocated during the procedure, the ADA, the only aid received by asylum seekers, can go about 7 euros per day, or about 200 euros per month for a single person, to more than 400 euros for a couple with children.

Has this difficulty, " continues Didier Leschi, it is necessary to add the fact that the "handling of cash can generate the racket". This new mode of payment desired by the ministry of the Interior, has been tested "successfully" in Guyana, highlights the OFII.

investment in financial and logistics

The report is, however, insufficient, sweeps Florent Gueguen, director of the Federation of the actors of the solidarity (Fnars), which requests "the suspension net" of a "reform" dangerous". "This is a reform which has the objective to rot the life of the people", regrets still the boss of the Fnars, one of the organizations that had co-signed at the end of July a letter to the OFII denouncing an "obstacle to the free provision of the allocation," which "limits the possibilities of access to a normal way of life, the time of the statement" of the claim.

" ALSO READ - An asylum seeker rescues a woman in danger

For him, it is also a blow to the associations and structures managing the home, for which this change will generate important investment and a reorganisation of logistics.

At the time of profile parliamentary debate potentially flammable on immigration in the fall, and that the problems of camps street, is full of Pierre Henry, director of the association France land of asylum, it appears as a "technocratic counter to the needs and the reality on the ground". The modification of this map is not central, he acknowledges, "but it embodies the law of nuisance maximum."

1 Thomas Cook badly in need of money 2 Drouot, in the back room of the auction 3 Married for 26 years with Pernod Ricard, Cubaron the... 4 A tobacconist paris accuses the PMU of having stolen... 5 Nixon at Trump, a half-century of imperialism, bellicose... 6 In the Île-de-France, the CGT is critical of the... 7 Employee Engagement – 4 Simple Tips to Boost Worker... 8 The guardian angels of the gare du Nord train station... 9 A parliamentary alert on the other debt of the State... 10 Argentina : under pressure, Macri multiplies gestures...