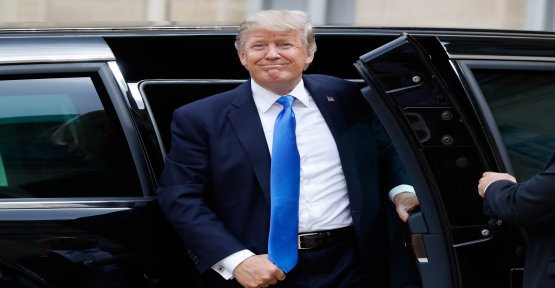 Donald Trump has taken Wednesday to the automakers who ignored his advances and preferred to enter into an agreement with the California on future emission standards more stringent. The agency of protection of the environment administration Trump has intended to relax the current standards, at the time that California, which already has the most restrictive rules in terms of vehicle emissions, wants it to go even further.

Several major automakers (Ford, Honda, Volkswagen and BMW) have decided last month to enter into an agreement with the State of the american southwest and others are in the process of the join, which puts the president in anger. Since Wednesday morning, he rants and raves on Twitter: "My proposal to the automakers in a politically correct would lower the average price of a car more than 3000 dollars, while making cars safer. The engines turn better. Very little impact to the environment! Leaders, fools".

on his return from a fundraiser, it has relied on the founding of Ford and General Motors, who "returns" in the grave "given the weakness of the current leaders of the auto manufacturers who are willing to spend more for a car less safe and less good, and that will cost 3000 dollars more by consumers. This is crazy!".

It accuses the California want to lead the automotive groups "to ruin". According to the New York Times , Mercedes-Benz is ready to join the coalition, with another great builder for the time being anonymous. If based on the tweets of the president, it could be General Motors. Toyota, Fiat Chrysler and General Motors were summoned last month to the White House, where a counselor asked them to show solidarity with the president, reports the daily new yorker.

The goal of the builders, which represent approximately 30% of new vehicle sales in the United States, is to have visibility over several years, the standards for CO2 emissions on the u.s. market, while a court battle is looming between the government Trump and the States, such as California, who want to keep the ambitious targets set by Barack Obama.

Donald Trump has proposed August 2018 to cancel the laws adopted under his predecessor for the period 2017-2025, which represented one of the main pillars of the climate in Obama. Instead, the standards would be frozen at the level of 2020 until 2026.

" According to Washington, the imported cars threatened the american national security

1 The vessels of the CMA CGM don will go along not Siberia... 2 Promotions to a large surface less convincing 3 The economic downturn puts central banks under pressure... 4 Kyriakos Mitsotakis: I invite investors of France... 5 The first nuclear floating Russian on the road to... 6 The chairman of the Fed, points out the harmful effects... 7 BNP Paribas delete 500 positions in France in a subsidiary... 8 Greenland : the tension between Trump and the First... 9 Nate Mitchell, co-creator of the virtual reality helmet... 10 Dick Fuld, ex-CEO of Lehman Brothers, the incarnation...

The vessels of the CMA CGM don will go along not Siberia...