Yellow vests: the traders affected will have exemptions

traders who suffered losses due to the movement of the "yellow vests" will be able to claim tax exemptions and not just the spreading of maturities, announced 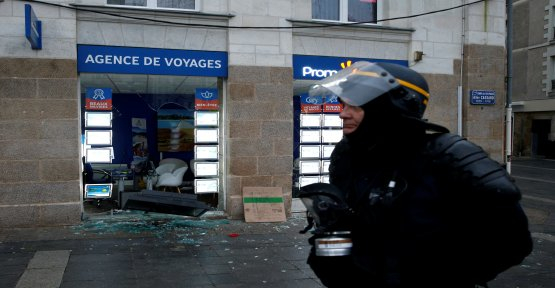 traders who suffered losses due to the movement of the "yellow vests" will be able to claim tax exemptions and not just the spreading of maturities, announced Thursday the government. "For that, you have to provide evidence that they have had a loss of revenue, loss of goodwill, they have suffered a heavy damage linked to the movement of the yellow vests", told BFM the Economy minister Bruno Le Maire after a meeting with the officials of the association France-Urban and the Association of mayors of France (AMF).

A form of a "request for delay of payment or remission of tax" has been put online on the website of the tax authorities (impots.gouv.fr). The trader can choose to request either a time limit or a discount. "We must strike hard, it is necessary to strike quickly. We have heard the calls for help of the traders who have been severely affected for weeks by the movement of the yellow vests", stressed The Mayor. The measure represents "a cost of several million euros that we are going to evaluate week after week", he indicated.

Jointly with the ministry of territorial Cohesion, Bercy has also announced a budget of three million euros for the "support to the commercial animation", in the framework of an operation launched on February 1st in Bordeaux by the Prime minister Edouard Philippe. The State co-finance initiatives ", encouraging the return of clients in the commercial zones of the city centres", said the release interdepartmental.

The procedure comes according to a press release inter-ministerial "in addition to the measures put in place since 26 November 2018". The government had then asked the insurers and the public investment Bank (Bpifrance) consider a support of loss of turnover of the traders adversely affected by the blockages.

1 Uber: the decision of the tribunal pushed back several... 2 In full strike, customs officers meet Gérald Darmanin 3 The presentation of the draft law energy postponed 4 Why are Americans moving so much? 5 The boom of offers of green electricity 6 Elections union at Air France: the CGT eliminated 7 Of control software of the Boeing 737 Max is going... 8 Art can help businesses to be more creative 9 Ways to Improve Your Essay for College Applications 10 5 Unique Traits Common With Russian Billionaires

Uber: the decision of the tribunal pushed back several...