A first for Pascal Dion

Pascal Dion was at the heart of the action all day as the curtain fell on Sunday in Montreal on the Short Track Speed ​​Skating World Cup. 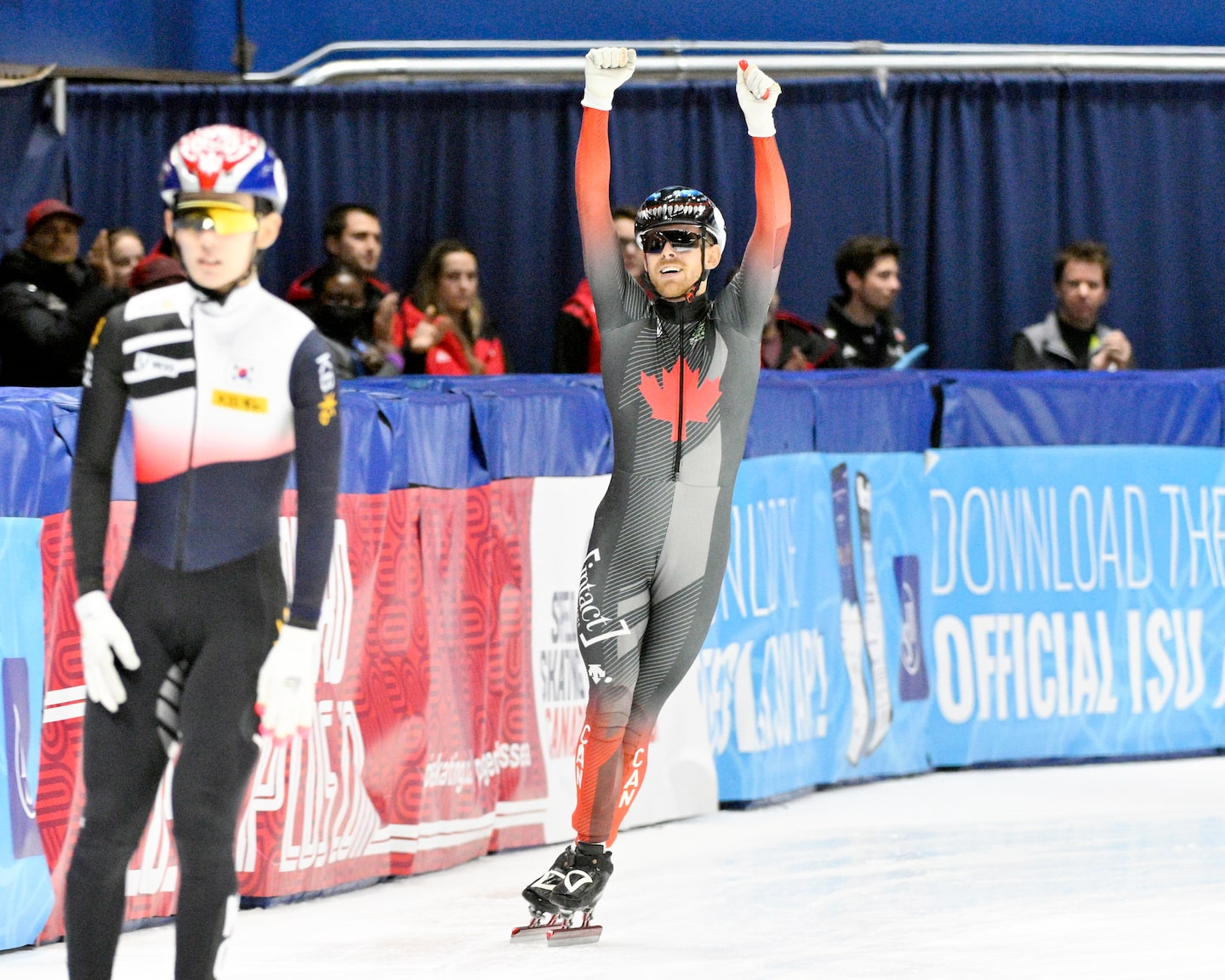 Pascal Dion was at the heart of the action all day as the curtain fell on Sunday in Montreal on the Short Track Speed ​​Skating World Cup.

• Read also: Heartbreak for the future

• Read also: A selection that fills with pride

Victim of a collision on Saturday, which cost him his chances of a medal, Dion bounced back in a good way by winning his first individual gold medal in an Olympic event. He won the 1000m after orchestrating an overtake with three laps to go to race to victory ahead of Koreans Kyung Hwan Hong and Tae Sung Kim.

Last year, he won the 3000m of the world championship presented in Montreal, but it is not an Olympic event.

"It's a great feeling to win this first gold medal at home," he said with his best smile. It was frustrating on Saturday, but I knew I had good legs. I played in the traffic and managed my race well saving my legs before attacking with three laps to go. Last year's World Cup standings champion in the 1000m, Dion has a different focus this year.

"I proved my consistency last year by getting several second and third positions," he said. I was shooting several laps forward, but my legs were getting tired. This year, I want to bet on strategy to win races. »

“I always prefer winning races to being consistent,” added Dion. Consistency allowed me to finish first in the overall standings, but I prefer victory at the risk of sacrificing the overall. »

Penalized in the A final, Maxime Laoun finished in fourth place in the 1000m.

Olympic champions in the 5000m in Beijing, the Canadians were aiming for nothing more than the top step of the podium at this first World Cup of the season, even if that could mean taking risks.

As Canada sat third with eight laps to go, Dion passed the Italian on the outside before sliding inside to edge ahead of the Korean. However, he crashed just after taking control of the race.

"We don't want to run for second, third and fourth places," he explained of his daring passing. I managed a really good overtake, but we were at the end of the race and the ice gave way. None of my teammates are angry. »

“Making three overtakes in eight laps is risky, but we are still the team to beat,” continued Dion. The bronze medal is fun for the fans, but it's important to run for gold. »

Silver medalists in Beijing, the Koreans savored their revenge. As for the Italians who had won bronze at the Games, they were penalized, which allowed Canada to climb to the third step of the podium. Kazakhstan deserved silver.

Support from his teammates

“We could have stayed in second or third place, but we are racing to win,” said Dubois. The four skaters, we were ready to take a risk. We had the legs to pass and we should have done it sooner. The Italians were protecting their second place and they were slowing down the pace. We followed this rhythm instead of attacking earlier, but we will learn and change our strategy when the start is slower. »

Laoun illustrated well the perception of other nations towards Canadians.

"We were dominant last year and we have a sign behind our backs this year," he said. They are waiting for us and we have been too patient even if we were well placed. We are the team to beat. »

Laoun is in solidarity with Dion's decision. “Our watchword is gold or the band, he imagined. I would rather lose a medal than not attempt a risky overtaking. »

“We run the relay to win, to add Pierre-Gilles. We are ready to take risks. »

“Pascal made a big pass and it would have been cool if it had worked with the partisan crowd supporting us. »

Kim Boutin had a tough weekend and she couldn't explain what happened.

"It hurts and I don't want to relive such a situation," said the quadruple Olympic medalist, her throat tied with emotion. I gave everything, but I was not at the level. I was 100% invested in the training plan. I don't understand what happened. »

Entered in both 1000m events, Boutin reached the B final on Saturday before retiring to focus on the 2000m relay. on Sunday, she was eliminated in the quarter-finals.

"Talking to the coaches, they think I need some rest," she said. We will see what we will do before the next World Cup in Salt Lake City next weekend. »

Despite his incomprehension, Boutin took the start of the 3000m relay, where Canada won the silver medal behind the Dutch, who were too strong for the field with in particular the quadruple Olympic medalist of the Beijing Games Suzanne Schulting and the champion reigning world champion in the 500m, Xandra Velzeboer, to lead them to the top step of the podium.

"We had a great race and the girls gave their all in their role," said Boutin. I always like to relay and have fun with the girls. The Netherlands rely on experienced skaters. It's a great combination to bet on a skater of Suzanne's caliber and a girl like Xandra who excels in finishing races. »

The limits are falling

In addition to her medal in the relay, Danaé Blais qualified for her very first career final in the 500m.

She finished fourth in a race where Velzeboer shattered the competition.

“I learned over the weekend that by removing my mental barriers and my limits, I can achieve great things,” she explained. For a long time I was identified only as a 1500m specialist. I am very happy with my performance and I want to continue breaking my limits. »

With the absence of Olympians Florence Brunelle and Alyson Charles, who could be back in January, Canada bet on Renee Steenge and Rikki Doak in the final. Claudia Gagnon skated in the semi-finals, as well as in the mixed relay. She won her first two World Cup medals.

Author of a spectacular comeback to take silver in the 1500m on Saturday, Steven Dubois did not take the risk of finding himself at the back of the pack this time and he led from start to finish to clinch gold. in the 500m on Sunday.

In an A final bringing together three Canadians among the five skaters, Dubois had a great start and he never left any doubts about his intentions to beat Korean June Seo Lee and Italian Pietro Sighel.

For the second day in a row, Jordan Pierre-Gilles finished off the podium after his fourth place in the 1000m on Saturday, while Mathieu Pelletier in his first career A final at the age of only 16 took fifth. rank.

"My first steps are faster than the Korean and I overtook him on the first corner," explained Dubois, who won his second career World Cup gold medal after that of Dresden during the 2019 season. 2020. I gave everything afterwards to create a good distance with my pursuers. I was confident in my game plan and I know what I'm capable of doing, but I also knew I was going to slow down a lot in the last two laps. This is something I need to work on.

“Despite my lead, you never know what can happen in short track, continued Dubois, who finished the first World Cup with two individual medals and two in the relay (5000m and 2000m mixed). I was not sure of the gap between us and I narrowed my lines too quickly. It was a perfect weekend. »

Pierre-Gilles was angry to finish off the podium for a second race in a row, but he was also able to see the positive aspects of his performance.

"Fourth place is the worst position you can finish," he said. I'm angry and it's not where I wanted to end up, but I've seen huge progress over the past year. I'm learning a lot and results like this weekend make me even hungrier. »

With hindsight, the skater from Sherbrooke believes that he should have boarded the train named Dubois.

"I should have used Steven as a rabbit," he said, "but I didn't feel too good on my blades. However, I managed to keep my cool. There is no margin of error in the 500m. I learned a lot and I can't wait for the next race. »

Pierre-Gilles fully savored the presence of three Canadians in the final.

"It was incredible to find the three in the final," he said. When I saw that Steven and Mathieu had qualified in the first semi-final, it gave me more motivation to do the same. »

Pierre-Gilles was particularly happy to see Pelletier reach the final at his first World Cup.

1 “Our best game of the year” 2 Speed ​​skating: Steven Dubois in gold in the... 3 A referendum awaits the Coyotes 4 Jose Altuve found his bearings 5 Framber Valdez carried by the presence of his father 6 “Revolution”: getting out of your comfort zone 7 “It’s a funny feeling”: Rémy Girard confides... 8 Songwriter: The Dream Life of Richard Marx 9 Songs released in October to discover 10 Montreal, from Beau Dommage to big damage 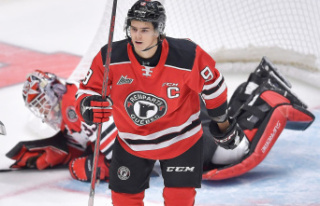 “Our best game of the year”