A pope on an essential but incomplete mission

In 1984, John Paul II's trip to Canada was worthy of a rock star tour.

In 1984, John Paul II's trip to Canada was worthy of a rock star tour. Crowds were coming. Media coverage was massive.

In 2022, the penitential pilgrimage of Pope Francis is at the antipodes.

Papal trips always involve their share of public relations and self-interested proselytizing. This one, much less. The reason is the very object of the journey.

Pope Francis is seeking to set his Church on a path of some lucidity about the revolting role it has long played in his “management” of residential schools for Indigenous children.

From 1836 to 1996, these cursed places were infernal machines to dehumanize more than 150,000 First Nations children. They broke their family ties and banned their cultures and languages.

Girls and boys were beaten. Hungry. violated. For many, until death ensues.

These residential schools were federally funded as part of a racist policy with genocidal intent.

They were also approved by the provincial governments and “subcontracted” to the clergy of Christian religions, the majority of whom were Catholic priests.

The last to offer his apologies in this long list of accomplices, Pope Francis came to ask forgiveness from the indigenous nations. His request necessarily calls for a response, negative or positive.

Considering the unimaginable magnitude of the trauma caused to all these children, survivors and descendants, the answer will depend on each and every one of them. Forgiveness is never a compulsory path.

Facing the Vatican, for the First Nations, it is nevertheless a first step, which they have been waiting for a long time. For the pope, this is the beginning of a possible reconciliation.

For it to be realized in the coming years, his request for forgiveness will however require concrete gestures of reparation. Not only from him, but from the Vatican as an institution.

To do this, however, Pope Francis will have to demonstrate complete lucidity.

Because, until last night, he still refused to recognize two crucial elements in the horror of boarding schools.

First, the multiple sexual assaults suffered by Aboriginal children at the hands of priests. However, last night, a dramatic turn of events. Finally, for the first time, the pope spoke of “sexual abuse committed against minors and vulnerable persons”.

Like what, the many criticisms of his silence, heard within the First Nations, have reached him.

The remaining missing element is the recognition of the ultimate responsibility of the Catholic Church as an institution of power.

The Pope instead chose to limit himself to pointing out that of “many Christians for the evil committed against the indigenous peoples”.

From the governments to the cassocked executors of the Vatican, this “evil” was nevertheless of an institutional and systemic nature.

The extent of the continuing damage inflicted on First Nations bears witness to this.

Without the full recognition of reality, the path towards reconciliation opened by Pope Francis promises to be difficult.

Its mention made in extremis of sexual abuse could however facilitate the following things.

Full recognition of the abuses imposed on the First Nations under the complicit yoke of the Catholic Church promises to be essential to any reconciliation.

1 Another threat to French in Ottawa 2 The planet is not spinning 3 Where is the Ministry of the Environment? 4 Quebec under the sun: beautiful summer weather for... 5 Spain: the prosecution requests more than eight years... 6 “Arlette”: A powerful satirical fable 7 “Revenge”: a New Yorker in Texas 8 “Maigret”: a very sad detective 9 "Luck": a story of luck... and madness 10 Sexual assaults in the Church: Portuguese justice... 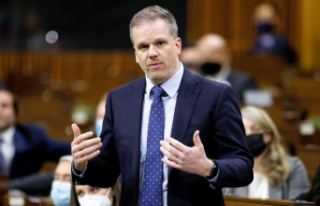 Another threat to French in Ottawa