While the Quebec state is betting big on the Blue Basket to counter the influence of Amazon, the American giant is a major tenant of the Caisse de dépôt et placement du Québec (CDPQ), learned Le Journal.

While the Quebec state is betting big on the Blue Basket to counter the influence of Amazon, the American giant is a major tenant of the Caisse de dépôt et placement du Québec (CDPQ), learned Le Journal.

"We currently have ten buildings across Canada and the United States in which Amazon (and/or their subsidiaries) are tenants," confirmed the Public Affairs team, Ivanhoé Cambridge, the real estate arm of the CDPQ.

But, no question of saying where these buildings are. Le Journal was able to confirm, however, that Ivanhoé partly owns an Amazon distribution center located near Saint-Hubert airport.

Institutional investors like the Caisse have invested heavily in warehouses and industrial-type buildings in recent years to take advantage of the enthusiasm linked to the explosion of e-commerce.

In addition to US$880 million in shares

In addition to its rental activities at Amazon, the Caisse has bet hundreds of millions in the American multinational on the stock market.

At the end of March, the Caisse held just over US$880 million in Amazon shares, according to a statement filed with US stock exchange authorities.

In mid-July, Le Journal reported that local traders are stamping their feet for the state to force the web giants once and for all to pay their fair share of taxes.

“SMEs understand that competition is part of the equation. All they ask is to be treated fairly compared to their counterparts in large multinationals, ”denounced François Vincent, vice-president for Quebec at the Canadian Federation of Independent Business (CFIB).

In an interview with the Journal, Franck Jovanovic, professor at the School of Administration Sciences of TÉLUQ, has added a layer in recent days.

“The discourse of multinational corporations on the creation of jobs and the direct investments in Canada from abroad that they allow is a marketing-type discourse”, he decided.

According to him, the question is not the jobs created by these giants, but the balance (what they create less what they destroy) and the type of jobs (low value-added jobs and low incomes ).

“Multinational corporations, like Amazon, by reducing their tax rate at the group consolidated accounts level to near zero, are helping to shut down small businesses,” he concluded.

Recall that in Europe, Amazon paid no tax on its sales of 55 billion US dollars last year, according to Bloomberg.

Yesterday, Amazon did not respond to questions from the Journal concerning its business ties with Quebecers' woolen stockings.

1 Living alone is hard on finances 2 Russia: eight dead in the fire of a building in Moscow... 3 India: two fighter pilots killed in the crash of their... 4 $1.2 million to help poultry producers 5 “They have to be able to sing anything” − Andréanne... 6 A Quebec Christmas for Vincent Niclo 7 Julie Marcoux: “I learned to manage my expectations” 8 Russian military accuses Kyiv of shelling Ukrainian... 9 Ukraine: five dead and seven injured in the bombing... 10 Montreal: a vehicle ravaged by arson 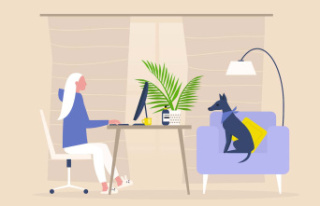 Living alone is hard on finances