Linebacker Brian Harelimana will have big shoes to fill this Thursday against the Saskatchewan Roughriders.

Linebacker Brian Harelimana will have big shoes to fill this Thursday against the Saskatchewan Roughriders.

The Quebecer will be the starter in place of Chris Ackie on defense, since he is injured.

“I like Brian. He impressed me last year and he's a smart player. He has instincts and understands the game. There will be rotations in this position, but I have faith in Harelimana,” head coach Khari Jones said after practice on Tuesday.

The second-year player has made his niche on special teams in 2021, but is already seeing a lot more ground on defense since the start of this campaign.

Last week, against the Argonauts in Toronto, he notably made up for the loss of Trey Watson. The latter was expelled after deliberately trampling on a rival. Harelimana seized the opportunity and his coaches were very happy with the job he did.

“I had a good game. They especially liked the fact that I was ready. It is important to know your assignments when you arrive in a match where you are not the starter and where you are sent into the heat of the action.

Since the start of the season, the Alouettes' defense (0-2) hasn't been bad, but it hasn't managed to dominate its opponents either.

“We have a lot of things to work on, analyzed Harelimana. We feel like we're giving away too many yards, we'd like to create more turnovers and sacks. We can help the team even more.”

It's quite a challenge that awaits the "Als" at Percival-Molson Stadium, since the Roughriders attack (2-0) has shown great things so far this season.

“Jason Maas is a very good offensive coordinator. He uses motions a lot. He runs with the ball differently than other teams. That's less area and more power. If we are well aligned, we should be successful, ”said the product of the Carabins of the University of Montreal.

1 EOTTM: successful weigh-in for Erik Bazinyan and Steven... 2 Death of Maradona: eight health professionals will... 3 Igor Shesterkin in the footsteps of Henrik Lundqvist 4 Aaron Judge is ready for refereeing 5 Aroldis Chapman open to new role 6 A Ravens player has died 7 Commanders: Commissioner Goodell says his hands are... 8 Untreated diabetes and methamphetamine involved in... 9 Kate Bush upset by her resurgence in popularity, powered... 10 The Sound of Music expands its cast 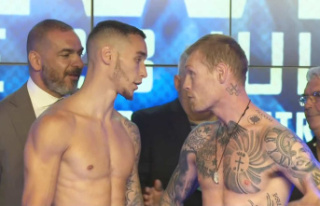