Berkeley Energia has appointed an Advisory Committee for the board of directors of its Spanish subsidiary, which owns the uranium mine project in Salamanca, which is currently in a 'dead line' situation due to the denial of authorization by the Government, which will be made up of Rafael Miranda, Jaime García-Legaz and Miguel Riaño, the company reported to the National Securities Market Commission (CNMV).

In this way, the company 'signs' people linked to the business and political world with great experience and prestige to defend its position in the country.

Berkeley Energia indicated that this Advisory Committee "will substantially strengthen" its position in Spain, "with the collective corporate, commercial and operational experience of the members of the committee, in addition to extensive commercial and government networks, which will greatly help the company as which continues to focus on resolving the current permitting situation and, ultimately, moving the Salamanca project forward toward production."

Meanwhile, Miguel Riaño is the managing partner of Herbert Smith Freehills in Spain, a firm specializing in energy, infrastructure, natural resources, the environment and public law.

At the end of 2021, the Ministry for the Ecological Transition and the Demographic Challenge rejected the Construction Authorization for the uranium concentrate plant as a radioactive facility in the Salamanca project.

Berkeley has defended that the Government rejected the company's request for NSC II "without following a legally established procedure" and has considered that the Ministry infringed the regulations on administrative procedures in Spain, as well as its Berkeley right of defense, "which would imply that the decision on the rejection of the company's NSC II application is not legal."

1 Ercros almost doubles its profit to September, up... 2 Oryzon receives FDA clearance for study with iadademstat... 3 RELEASE: CF Pathways accelerates growth with capital... 4 The sale of homes increased by 0.8% in September,... 5 The constitution of new companies fell by 3.2% in... 6 ANNOUNCEMENT: Skiller Academy participates in the... 7 Volkswagen and Seat accept the 397 million euros of... 8 SMEs capture between 3% and 4% less credit than before... 9 ANNOUNCEMENT: The world's first lightweight headphones... 10 COMMUNICATION: Aliter Abogados: "in a divorce... 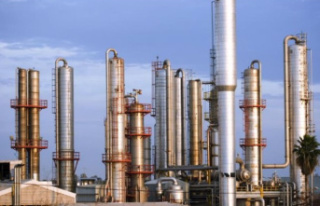 Ercros almost doubles its profit to September, up...