A chain of cinemas in Peru has withdrawn the gender theory warning that it had previously attached to the animated film Buzz Lightyear (Lightyear), which includes a kissing scene between two women.

A chain of cinemas in Peru has withdrawn the gender theory warning that it had previously attached to the animated film Buzz Lightyear (Lightyear), which includes a kissing scene between two women.

The warning, decided by Cine Planet on Thursday when the film was released, sparked a great controversy in Peru. An association for the defense of the family had applauded the initiative, while feminists on the contrary denounced the homophobia of Cine Planet.

Faced with the controversy, the company distributing the film finally announced in a statement on Saturday that this warning was not appropriate.

The Pixar Studios film was released in multiple countries on Friday, but was denied release in a dozen Muslim-majority countries and territories in the Middle East and Asia, including Malaysia, Lebanon, Jordan, Egypt, Saudi Arabia and the Palestinian Territories.

In the film, Alisha, the head of the main character (Buzz Lightyear, the intrepid astronaut made famous by the Toy Story saga), is married to a woman.

A fleeting scene showing her kissing her wife was originally cut by Pixar Studios, a Disney subsidiary. But employees of these companies had protested against this gesture, criticizing the attitude of the world number one in entertainment, accused of not committing to defending the rights of LGBT people, and the scene had been restored.

1 'Back to the Future' videotape sets auction... 2 TV nostalgia: David Savard, a fan of the 1970s 3 Cine nostalgia: the 40 years of “E.T.”, “The... 4 Summer, the swimming pool and our animals 5 Teenage Mutant Ninja Turtles: Deliciously Retro 6 New novel by Agnès Martin-Lugand: love, stronger... 7 Maude Landry: a little philosophical side 8 New novel by Jean Lemieux: great quest until 1968 9 Variations on the same theme 10 The regression of the Canadian Grand Prix 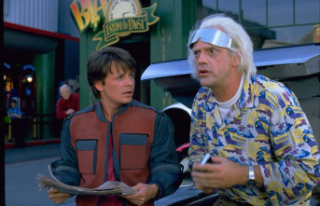 'Back to the Future' videotape sets auction...