Can fasting improve the success of cancer treatments?

Preclinical studies have shown that severe caloric restriction, achieved through cyclical episodes of fasting or using diets that mimic fasting (very low in carbohydrates and proteins), enhances the antitumor activity of chemotherapy, immunotherapy or endocrine therapies.(1)

These positive anti-cancer effects have been attributed to two major effects of fasting or fasting-mimicking diets:

1. a reduction in blood sugar, insulin and the growth factor IGF1, which reduces tumor growth and prevents the repair of damage inflicted on cancer cells by treatments and

2. an increase in antitumor immunity (infiltration of tumors by CD8 T cells and decrease in immunosuppressive T cells).

From lab to clinic

To see if these encouraging effects can be replicated in humans, clinical trials have been conducted to assess the feasibility and antitumor activity of these fasting-mimicking diets in cancer patients who are being treated with standard antitumor therapies.

In one of these trials, 101 patients who were being treated for various types of cancers agreed to adhere to cycles comprising 5 days of a very low-calorie diet (600 calories the first day followed by 4 days at 300 calories), interspersed with a 3-week period of normal feeding.(2)

The objective of this caloric restriction is to imitate fasting by drastically reducing the amount of calories ingested, but without causing malnutrition thanks to a plant intake (fruits, vegetables, nuts, tea) rich in vitamins, minerals and fats essential.

For example, a typical menu included a meal consisting of 300 g (75 kCal) of mixed vegetables (spinach, cabbage, zucchini, lettuce), a tablespoon of olive oil (108 kCal) and a fruit (100 kCal ) like an orange, an apple, or a pear.

This type of intervention where the volunteers eat little, but do not completely fast, is much easier to accept and this is exactly what the study showed, with 99% of the patients who managed to follow a cycle of severe restriction. and 76% who have completed at least three cycles.

In addition, the weight losses that occur during the fasting period are reversed by the return to normal diet and therefore do not seem to pose a health hazard to the majority of patients.

Practicing these cycles of severe calorie restriction had dramatic effects on metabolism, with decreases in blood sugar (19%), insulin (50%) and IGF-1 (30%) levels. .

From a therapeutic point of view, the best news, however, remains the strong modulation of anti-cancer immunity: transcriptomic analyzes have revealed that cycles of the diet mimicking fasting decrease immunosuppressive immune cells, with in parallel an improvement of several immune signatures (intratumoral immune responses, in particular) which are known to be associated with a better clinical response in cancer patients.

According to the authors, the combined drop in blood sugar, insulin and IGF-1 levels caused by the drastic reduction in carbohydrate and protein intake profoundly alters the metabolism of cancer and immune cells. There is then an erosion of the immunosuppressive shield normally erected by tumors to protect themselves and grow unhindered, thus allowing immunity to carry out its work and destroy abnormal cells.

1 Bars for athletes on the test bench (continued) 2 Advocacy to put an end to bad construction 3 Five tips to reduce your home insurance costs 4 ANNOUNCEMENT: Ascend to the overclocking throne! GIGABYTE... 5 China shows signs of weakness again with the contraction... 6 Applus achieves an operating result of 148 million... 7 The Ibex 35 starts the week with a fall of 0.15% and... 8 Retail sales slow down their growth in September to... 9 STATEMENT: The Granollers City Council awards the... 10 Skoda earns 856 million until September, 4.9% less 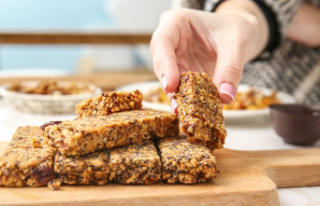 Bars for athletes on the test bench (continued)