Stripped from the calendar for two years, the fault of the pandemic, the Canadian Grand Prix could well register a record attendance this weekend.

Stripped from the calendar for two years, the fault of the pandemic, the Canadian Grand Prix could well register a record attendance this weekend.

• Read also: The great F1 circus is back in Montreal

• Read also: Here is the calendar of F1 parties

• Read also: Canadian GP: Lewis Hamilton assures that he will come to Montreal

As it is already announced that the race will be sold out, fans who do not currently have tickets in their possession will have to pay the big price if they want to have access to the Gilles-Villeneuve circuit.

And the only way to attend the event will be to fall back on resale sites that have sniffed out a good deal. For example, an individual ticket in the main stand (1), for the three days, could cost between $1,113 and $4,600, according to the stubhub.ca site, consulted by Le Journal.

The better your seat is located in the upper rows, for a better view of the track, the higher the price.

Initially, you had to pay $595 for the same ticket sold by the Canadian Grand Prix.

This situation applies to all the stands installed on the site. Identified by Canadian driver Nicholas Latifi, grandstand 11 is certainly one of the best placed on the circuit, but it is also one of its most expensive.

To cope with exceptionally high demand, two stands have been added (16 and 32), others have seen their capacities increased. It is therefore to be expected that nearly 350,000 people (unheard of), in total, will attend the three days of competitions on Île Notre-Dame.

Last I heard, there were barely a few general admission tickets left (no reserved seats) for Friday only. In grandstand 47, the only one to offer day tickets, a few places were still available as of yesterday.

It should be mentioned that the prices have not been increased since 2020, when the event was to be presented before being canceled for the first time.

Forty years later, we can see that it obviously costs a lot more to see F1 racing in Montreal, but it's still more affordable than most other destinations, including Miami, which presented its inaugural event last month. last.

Remember that at that time, the start/finish line and the pits were located at the exit of the hairpin on the east side of the track.

Still 40 years ago, the public was invited to visit the site for free on Fridays.

General admission ticket prices for Saturday and Sunday had been set at $12 and $15 respectively.

1 The Warriors one victory away from the coronation 2 Directors block the distribution of rapid tests in... 3 Kaiden Guhle and the Oil Kings qualify for the Memorial... 4 League of Nations: Canada surprised by Honduras 5 Air France-KLM completes its capital increase 6 Progress indicators: favorable trend for Quebec 7 Ukraine: new bridge destroyed in Severodonetsk, Ukrainians... 8 South Korea: Truck drivers' strike disrupts supply... 9 It takes effort to do well in school 10 Dominique Anglade has nothing left to lose 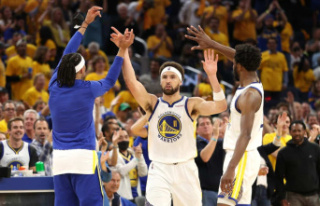 The Warriors one victory away from the coronation