Food poverty affects almost 50% of the population in countries like Guatemala or El Salvador, according to IDB.

Food poverty affects almost 50% of the population in countries like Guatemala or El Salvador, according to IDB

Mexico and the countries of Central America have allocated an average of 1.2% of their Gross Domestic Product (GDP) in 2022 to deal with inflation and food security, two problems that have affected the region "considerably "in recent months.

According to the study 'Food Security in Central America, Panama, the Dominican Republic, Mexico and Haiti', prepared by the Inter-American Development Bank (IDB), the higher costs of food have affected the purchasing power of households in the region and Consequently, there has been an increase in food insecurity.

In the last year, between 40% and 50% of the population of countries such as Guatemala, Honduras or El Salvador was in a situation of food insecurity, which represents approximately 14 million people. In turn, more than 25% of its inhabitants face a food emergency situation, around 7.2 million people. This figure represents, according to the IDB, a significant increase from 2019 levels.

Latin America is characterized by having an "adequate availability" of food, but this "was compromised" by the paralysis of economic activity during the pandemic, as stated in the report. In addition, subsequently, the increase in the prices of energy and basic foods represented a "significant" negative supply shock for the countries of the region, which depend to a large extent on imports.

By country, there is "great heterogeneity" in the fiscal costs applied to mitigate food problems. While in Mexico 2% of GDP was allocated, this percentage stands at 0.1% in Costa Rica. For their part, the measures in Honduras, the Dominican Republic, El Salvador or Nicaragua represent between 1.35 and 1.8% of GDP.

Despite the fiscal cost, it is considered that, in general, the measures adopted were of a compensatory nature and to date have not had a major impact on food inflation.

Looking ahead to the coming months, after reaching all-time highs, food prices have begun to normalize, although they are still above the levels observed before the pandemic.

In the case of corn or wheat, the estimated falls are between 12% and 30% in the second half of the year, compared to the first half of 2022. Meanwhile, the prices of energy goods such as natural gas are still they refuse to come down.

Likewise, the increasing frequency of adverse weather events such as droughts or floods has a negative effect on the primary sector, which could "exacerbate" food insecurity. "As the lean season progresses, job opportunities would decrease, reducing income and, with it, the possibilities of access to food," concludes the IDB study.

1 The first natural gas regasification plant in Germany... 2 RELEASE: Classic Parade offers a wide selection of... 3 RELEASE: BRILIANPRENEUR UMKM EXPO(RT) 2022 scales... 4 Goirigolzarri takes stock of 2022 and believes that... 5 EU energy ministers meet tomorrow under the ultimatum... 6 La Caixa Foundation, Telefónica Tech and El Corte... 7 The registry of 'crypto' providers of the... 8 Spaniards improve their assessment of teleworking... 9 The PP asks in Congress for a new unemployment indicator... 10 The Government starts this week the last 5G auction... 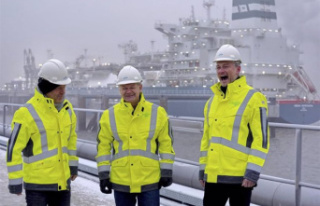