Crowned at his “favorite race”

ROBERVAL | Italian Edoardo Stochino offered an open water swimming lesson at the Traversée du lac Saint-Jean on Saturday, as he mastered the cold and the waves in a race marked by a series of withdrawals shortly after the departure. 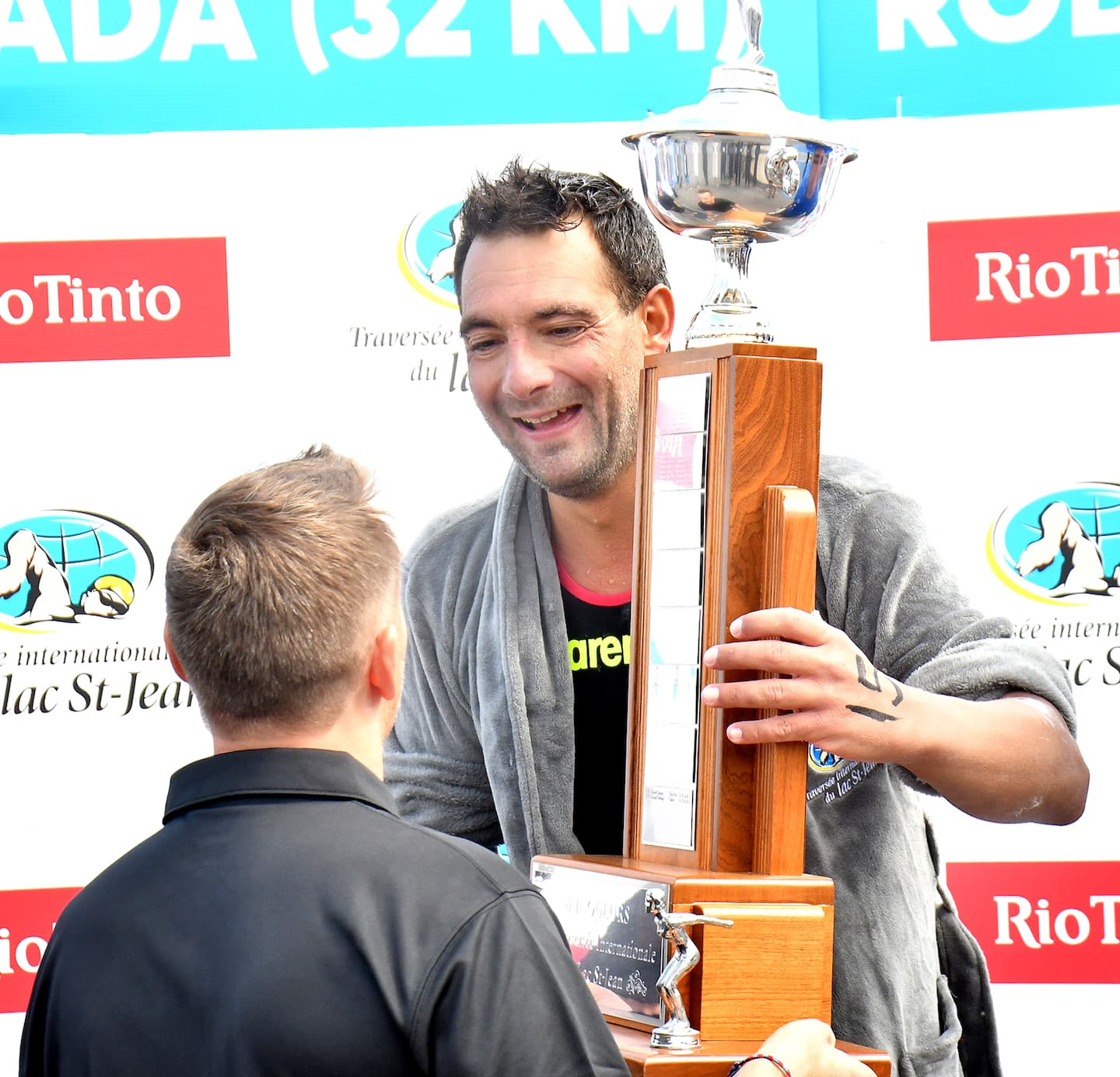 ROBERVAL | Italian Edoardo Stochino offered an open water swimming lesson at the Traversée du lac Saint-Jean on Saturday, as he mastered the cold and the waves in a race marked by a series of withdrawals shortly after the departure.

Unforgiving for some swimmers, Lac Saint-Jean quickly showed why its reputation is second to none in the world of open water swimming. The 14 athletes who took the start from Péribonka were treated to all that the body of water has good, or worse, to offer.

Wind, waves of three or four feet at times and a little rain made life difficult for them, especially in the morning. Some had difficulty dealing with the temperature of the water. They were not entitled to the wetsuit since the water temperature was 21°C.

William Racine, from Beauport, was among them. "I just froze", summarized the one who rubbed shoulders with the mythical race for the first time in his life.

But as the misfortune of some is the happiness of others, the hero of the day took advantage of these conditions to show the extent of his talent and sign a second victory at the Traversée, after his triumph in 2018.

"I like cold water. This morning, I was hoping not to have to wear a wetsuit. I like the waves. At home, I train in the sea with the waves and the cold water. And the waves are perfect for me,” Stochino, 34, rattled off in his thick Italian accent.

The one who practices the profession of policeman was quick to apply his own law from the middle of the race, where he dropped his main rival, the Argentinian Franco Ivo Cassini, unable to follow the pace dictated. Stochino touched the finish plate after a 6:55:4 effort, 40 minutes faster than his last race here in 2019.

"It's my favorite race. I love this lake," the winner said, prompting cheers from the crowd.

The start of the day was marked by four retirements in a short period of time. Veteran Damian Blaum (Argentina), who has seen others, was first knocked out. by the cold, which caused him an asthma attack. Frenchman Bertrand Venturi, William Racine and Egyptian Marwan Elamrawy then threw in the towel. A black series that stretched over only 75 minutes.

“All symptoms of hypothermia appeared. It forced me out of the water,” Racine said.

“Now it was starting to get critical. I had been dragging cramps for at least 30 minutes. That's ok, I'm able to "deal" with it, but when the other symptoms have arrived: confusion, dizziness, you know it's not going well. »

Venturi, for his part, says that his legs were "paralyzed". “The cold may have caught us by surprise and quickly seized us. [...] The pain was so strong, I could no longer swim, "said the native of Sète, in the south-east of France.

“It moved well, even in the Péribonka River. It wasn't pretending. [...] We have seen everything. No sun, still wind, there are waves..."

Proud of him anyway

As for William Racine, his working day did not go at all as planned. The 26-year-old athlete had the goal of completing the event and learning the trade. He will certainly have succeeded in one of them.

"I think there I know exactly what to work on, I know who to work with. I learned a lot. I think I will be able to prepare well for next year if I have the opportunity to do so. »

The French Morgane Dornic won a second consecutive victory at the Traversée and her success had a little Quebec flavor since the swimmer has been shining for several seasons with the Laval University swimming club.

The least we can say is that this second triumph was achieved with panache. The young woman from Morlaix, on the north coast of Brittany, stopped the clock after 7:19:8 even allowing herself to warm up the Macedonian Aleksandar Ilievski at the very end of the course. She finished 4th overall.

Only 23 years old, Dornic used strategy to ensure her success. Shortly after leaving, she found herself in a small group. But the cold gradually invaded his body, forcing him to try something.

“I thought to myself, do I stay in the group or do I go on my own? Because it is always a risk to go alone. I was a bit cold, so I thought I might as well go at my own pace and leave. I know that I'm still good at keeping a rhythm for a long time. I said to myself let's go and it still paid off, "she said, all smiles, while her fan club cheered her on.

Several of his supporters wore white vests that read "Come on Momo!" ". A support that warmed his heart.

A member of the UL swim club for six years, she will be completing her course shortly. She takes pride in it, but also learnings that will have served her during the day on Saturday.

“[I remember] the support I received. The group, of course, always helps. And the cold, maybe, she laughed. The five winters in Quebec help a little to prepare for the cold. »

She does not yet know if she will be back next year to defend her title of double champion since she will then have completed her master's degree in international security. And we may well need her elsewhere on the planet.

A true lesson in courage

The Saguenéenne Émilie Tremblay had promised to do everything in her power to complete her first crossing of Lac Saint-Jean. With a good dose of courage and character, she kept her word.

The stands at Place de la Traversée had been empty of their spectators for quite a while when the 20-year-old swimmer finally reached the finish.

Families, relatives and friends vigorously encouraged their Emilie. Even the organization of the Crossing made sure not to miss the moment and came forward on the rotunda to applaud the heroine of the day. A triumphant arrival, worthy of a winner.

Realization of a dream

Émilie finally touched the plate after about 10 and a half hours of effort. Her final time will not appear on the official score sheet because she finished after regulation time.

Except that time no longer counts when you have just realized your dream. A dream born here, almost ten years ago.

"Exhausted! she spontaneously replied after being asked how she was doing. " I'm tired. But I'm really proud of myself. I think that's what stands out the most. »

If she doubted? Yes, she humbly admits. But she pushed back to the bottom of herself this desire to return to Roberval aboard a boat. “When I had six kilometers left, I kind of had a boost of energy. I don't know if it's because I knew the end was coming [...] But I had renewed hope. »

Her feat, she had to achieve it solo. Or almost, she makes sure to specify.

A reassuring presence that certainly allowed him to continue on his way. The tough times seemed less harsh with his valued allies by his side.

However, she does not dare to comment on her possible participation in the 69th edition of the Traversée internationale du lac Saint-Jean next year.

"It's not in my plans. My goal was to do it once and I did. […] It’s more no than yes, ”she said before going to take a rest. No one will dare to say that it is not deserved in his case.

1 On Instagram, Safia Nolin denounces the return of... 2 The planet is hot: the Mediterranean is less and less... 3 Threatened with decapitation: asylum refused despite... 4 Hit by lightning: a house total loss in two seconds 5 A naturist from here manages to pinch a French pedophile 6 Fraud on social networks: extortion by threat targeting... 7 Series of thefts on Avenue Myrand: desperate traders 8 A toxic mine decimated a village in the Laurentians 9 Mountaineering | Alpamayo: a great achievement in... 10 What future for LIV Golf and the sport? 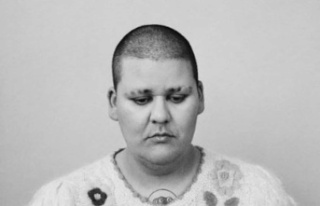