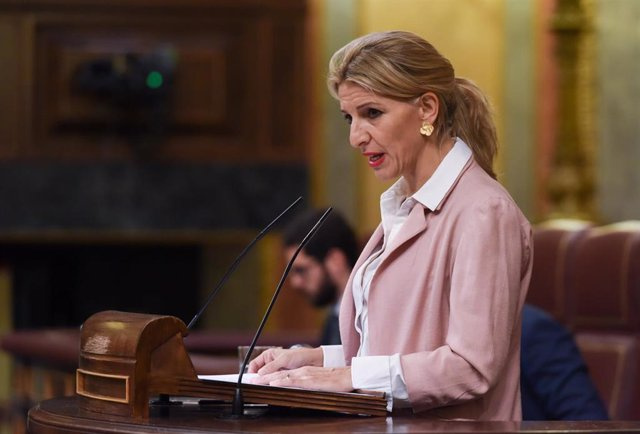 The Second Vice President and Minister of Labour, Yolanda Díaz, presented the 2023 General State Budget (PGE) for her portfolio in Congress this Tuesday, which exceeds 29.4 billion euros and is designed to "expand social protection". and sustain "job creation."

Díaz explained in his speech that the 29,473 million euro item that his portfolio will execute in the next year is 2% lower than that of 2022, "very good news, because it is reduced due to the positive evolution of the labor market" .

"It allows us to maintain the level of unemployment protection and reduce spending on benefits by 1,192 million euros," said the minister.

Work will recover in 2023 the unemployment benefit equivalent to 60% of the regulatory base, reduced to 50% after 180 days during the popular government of Mariano Rajoy. With this change, the unemployed will receive 100 euros more, until they obtain a benefit close to 1,000 euros per month.

Díaz stressed that this recovery in the unemployment benefit will allow the beneficiaries to maintain their purchasing power "in the face of inflation that is truly impossible in our country."

The unemployment subsidy will increase from 480 euros per month, with an accumulated amount of 50 euros since 2020.

The head of Labor has indicated that the increase in benefits and the reduction in spending is possible thanks to the fact that the unemployment rate will stand at 12.2% in 2023. "It is undoubtedly too high a rate, but it is less than half of what we suffered in Spain in 2013 with the financial crisis", he added.

The PGE 2023 also contemplates an increase in the Public Indicator of Multiple Effects Income (Iprem) up to 600 euros per month to "improve and expand the protection of the most vulnerable groups."

During the next financial year, active employment policies will receive more than 8,000 million euros, "the largest figure in history". Of that amount, 6,847 million, 367 million more than in 2022, will be managed by the Public State Employment Service (SEPE), which Trabajo intends to transform into a Spanish Employment Agency.

The minister recalled that this is "the third consecutive rise" in this item, which accumulates an increase of 38.5%, equivalent to 2,231 million euros, since 2020.

The Ministry of Labor will maintain in 2023 the amount of funds transferred to the autonomous communities for active employment policies, distributed as established in the Sectoral Conference.

"In a legislature hit by successive crises, the funds transferred to the autonomous communities for active policies have doubled to the highest figure in history," said Díaz.

The person in charge of Labor has specified that this is possible thanks to the quotas of the workers, which allow progress "in an extraordinary way in the self-financing of the budget".

"The State's contribution to balance the SEPE accounts will no longer be necessary," insisted the minister, who expects income of 27,200 million euros in installments in 2023, thanks to the evolution of employment and the increase in the SMI, as has commented.

The Ministry headed by Díaz will allocate 206.4 million euros in 2023 to the Labor Inspectorate, 8.5% more, to "continue improving human and computer resources" that allow this body to monitor compliance with legal regulations.

Díaz stressed that the amount for the prevention of occupational hazards will be increased by 26 million euros, and added that this issue "is being discussed at one of the three pending tables in the social dialogue", which he hopes will be concluded before the end of the year.

The Minister of Labor has also alluded to the other competence of her Ministry, the Social Economy, which will receive 81.5 million euros in 2023, 34 million more than this year.

"Much remains to be done, but the improvement is important, we have multiplied the budget in this legislature by ten", indicated the minister, who recalled that the social economy represents 10% of Spanish GDP, includes more than 42,000 companies and It employs about 2.5 million people.

In addition to breaking down the accounts of his portfolio for 2023, Díaz has shared with the Lower House the balance of budget execution from previous years.

"We humbly believe that the result is positive, especially if we take into account the adverse circumstances of the European Union (EU) and our country: pandemic, energy crisis, inflation and war in Europe," Díaz said.

The minister has enumerated before the deputies that in these years it has been possible to create more employment, of better quality and reduce unemployment rates. The figures for affiliation of women to the "highest" Social Security in history and the highest figures for salaried employment in Spanish history have also been recorded.

Likewise, he pointed out that in this legislature the number of young people with the highest employment in the last 11 years has been achieved, with a youth unemployment rate of 29%. The temporary employment rate, for its part, is also the lowest, at 17.5%, "very close to the European average". In the case of the unemployment rate, Díaz has stressed that his Ministry has achieved the lowest for 14 years, at 12.67%, far from the average of 17% that the country was dragging.

Díaz has thanked the parliamentary groups that in previous years understood "the difficulties of the moments" lived, and has extended his thanks to the social agents, since with the collaboration of all "the balance is sincerely positive".

The Minister of Labor considers that the 2023 accounts give "stability and certainty" to the country "in the face of a situation of uncertainty."

1 Repsol shoots up 6.8% and leads the rises of the Ibex... 2 The renewable auction for 3,300 MW is almost deserted 3 The Government passes the first round of voting on... 4 ANNOUNCEMENT: Stephen Hermitage joins Sai Life Sciences... 5 STATEMENT: TECNO has presented the PHANTOM X2 series... 6 STATEMENT: The warning comes after an investigation... 7 RELEASE: Epson Europe and SEGA of America Team Up... 8 Endesa foresees the distribution of up to 5,390 million... 9 Rovi leads the losses of the Ibex 35 with a drop of... 10 Yumminn raises 1.4 million to boost its payments with... 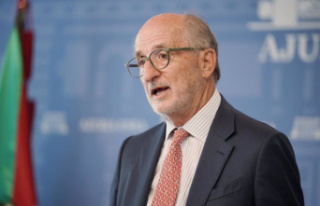