Debbie Lynch-White and Olivia Palacci will star in the new dramatic comedy from Séries Plus, written by Kim Lévesque-Lizotte.

Debbie Lynch-White and Olivia Palacci will star in the new dramatic comedy from Séries Plus, written by Kim Lévesque-Lizotte.

The two actresses will share the screen with their colleagues Julie de Lafrenière and Sarah Desjeunes Rico with whom they will play “Les Bombes”.

Juliette (Olivia Palacci), Vicky (Sarah Desjeunes Rico), Claudine (Debbie Lynch-White) and Emma (Julie de Lafrenière), four thirtysomethings who don't know each other, will learn to stick together when they all end up in the same room in a center specializing in addictions.

Directed by Pascal L'Heureux, this fiction should be one that does good to the soul and in which strong characters address contradictions and questions about human nature as well as the desire to feel better about yourself.

Filming should begin in the coming weeks, particularly in Orford.

Broken down into six episodes, “Les bombes”, written by Kim Lévesque-Lizotte and produced by Sovimage, will land on Série Plus next winter.

1 [PHOTOS] Discover the most expensive house on the... 2 By defending abortion, the people of Kansas also comforted... 3 Parliament Hill: a driver tried to break into an entrance... 4 MLS: the Galaxy interested in a Barcelona player 5 Canucks: Ty Young is living a dream 6 New heat wave over France and Spain 7 New outbreak of violence in Karabakh, Baku takes several... 8 Iranian nuclear: negotiators return to Vienna 9 UK students rise up against erection of 'phallic'... 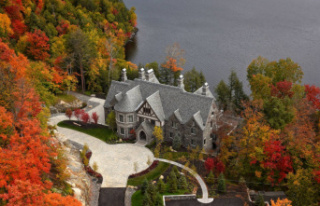 [PHOTOS] Discover the most expensive house on the...