Eurozone inflation remains runaway and climbs to a record 10.7% in October 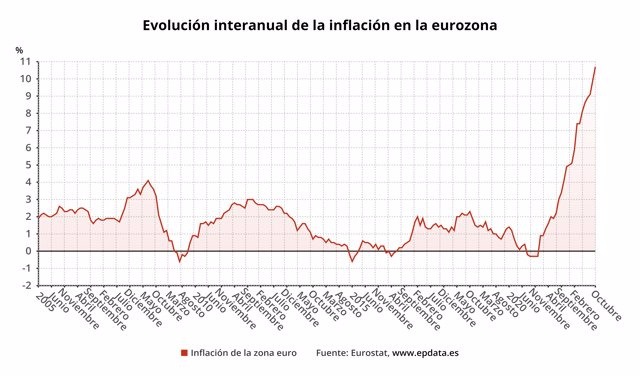 The year-on-year inflation rate in the euro area stood at 10.7% in October, which marks a new historical record and represents an acceleration of eight tenths compared to the figure for September, despite the increases in interest rates undertaken by the European Central Bank (ECB), according to the first estimate published by the Community Statistics Office.

In October, a general rise in prices was observed in the eurozone, with an acceleration in the rise in energy prices, which grew by 41.9% in the tenth month of the year, compared to 40.7% year-on-year in September .

Likewise, fresh foods became 15.4% more expensive in October, which represents an acceleration compared to the 12.7% of the previous month. Services registered an inflation of 4.4%, one tenth more, and non-energy industrial goods have risen 6% annually, half a percentage point more than in September.

By excluding the impact of energy from the calculation, the interannual inflation rate in the euro zone stood at 6.9% in October, compared to 6.4% in the previous month, while also excluding the effect of the prices of fresh food, alcohol and tobacco, the core inflation rate has reached a record 5%, two tenths more than in September.

In this way, the price differential in favor of Spain with respect to the eurozone widened in October to 3.4 percentage points from the 0.9 points of the previous month.

Last week, the Governing Council of the European Central Bank (ECB) raised interest rates by 75 basis points in July, to 2%, thus chaining three consecutive rises in the price of money and warning that it will continue to raise the rate in upcoming meetings, although the pace and intensity of the increases will be decided "meeting by meeting" based on the data.

1 Economists cut their growth forecast for Spain in... 2 Brussels hopes to "advance" in discussions... 3 Repsol acquires 33% of the capital of the technology... 4 Endesa will be the first company to offer electricity... 5 Amazon reopens the doors of its logistics centers... 6 ANNOUNCEMENT: The Vallsur toy library offers activities... 7 The EU sees "unacceptable" discrimination... 8 The Ibex 35 erases the losses and defends the 7,900... 9 Mapfre Economics cuts its growth forecast for 2023... 10 ANNOUNCEMENT: VAPORESSO prepares XROS 3 for launch... 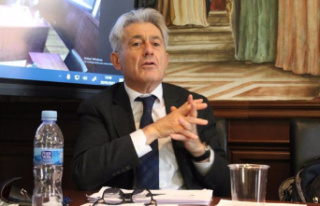 Economists cut their growth forecast for Spain in...