First day of vacation on an airport bench

Exasperated Quebecers whose Sunwing flight was delayed had to trade their first day of vacation in Cayo Coco for the benches at Pierre-Elliott-Trudeau airport on Thursday. 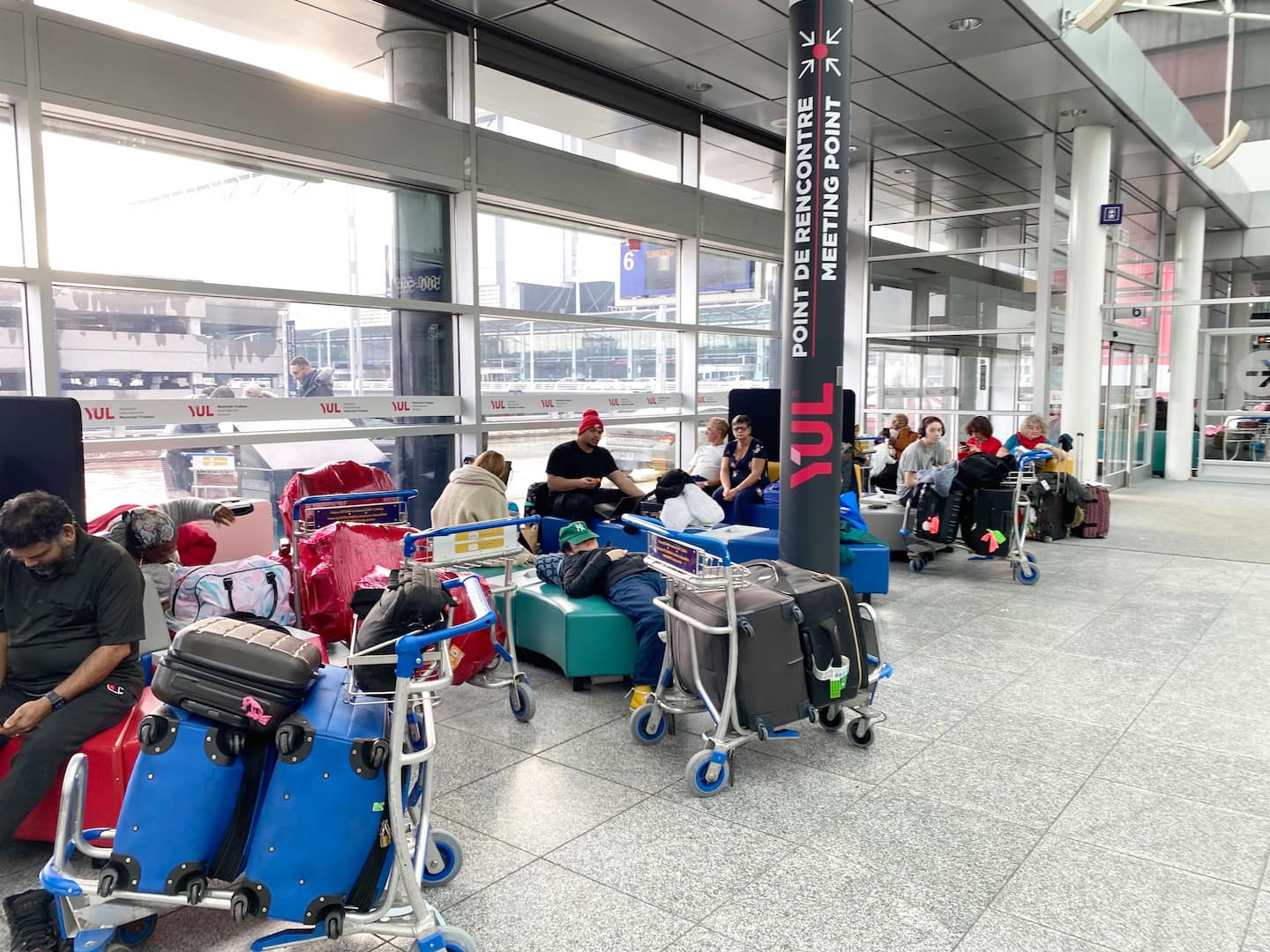 Exasperated Quebecers whose Sunwing flight was delayed had to trade their first day of vacation in Cayo Coco for the benches at Pierre-Elliott-Trudeau airport on Thursday.

“To say that we are on vacation is relative,” philosophized a couple of travelers met at the airport Thursday afternoon.

"We thought we were leaving with peace of mind, but we find ourselves not sleeping for more than 10 hours because we don't know what will happen," lamented these fifty-year-olds who left Sherbrooke, requesting anonymity.

The couple managed to squeeze in a few hours of sleep on the "luxury" benches at the airport, as the hotel was fully booked.

Maria Prellezo and her daughter Naomi Schwartz also arrived at the airport around 3:30 a.m. in the middle of the night to catch the same 7 a.m. flight to the beaches of Cayo Coco, Cuba.

“According to the Sunwing app, we are in Cuba right now. They sent us a message to tell us to have fun, but let's say we don't really have fun here, "said the teenager with a laugh.

To compensate its customers during the wait, Sunwing gave them $20 each for food, as well as a $50 credit for a taxi.

"But take a taxi to where?" We're stuck here,” laments Ms. Prellezo, who doesn't see how she could return to Varennes and return to the airport with just $50.

At least these four travelers, although exhausted, were finally able to fly Thursday evening.

Others weren't so "lucky," like Stéphan Despins, who was scheduled to depart on December 27 from Bagotville to Punta Cana. The day before departure, the flight was cancelled.

"They knew for a long time," he says. Yet we received no explanation, nothing. »

It was the airport that informed travelers that Sunwing had canceled all flights for the week departing from the regional airport. Mr. Despins hopes to be quickly reimbursed for the $17,800 spent on the family trip.

►Thursday at 3 p.m., of the seven Sunwing flights scheduled to take off from Montreal-Trudeau airport, only one was on time. One was canceled, two were postponed to the next day and three were delayed the same day, according to the airport website. Almost no delays or cancellations were to be deplored at other airlines.

Sunwing planes are also leaving half empty and vacationers miss their flights due to misfires.

"It was a total mess, we were between 60 and 100 people to have missed our flight", indignant Nadia Beaulieu, who was to leave on December 26 for Punta Cana with 12 members of her family.

Early Monday morning, she was about to get in the taxi to go to the Montreal-Trudeau airport, when she received a notification by text message. His 10 a.m. flight was rescheduled for the following day.

Sunwing had scheduled the departure for 5:55 p.m. on December 27. However, the airport website rather announced the flight at 8 am. The traveler, worried, called the company. The agent on the phone told him to trust the app. But the next morning, while she was at home, a new notification came in at 6 a.m., announcing a change of gate for the 7 a.m. departure.

Ms. Beaulieu called Sunwing back in a panic. At the end of the line, the agent assured her that she did not miss her flight, that he would leave well in the evening.

At 2 p.m., the family arrived at the airport. But the flight finally left in the morning, with only 40-50 people on board, it seems.

Like nearly a hundred passengers, Ms. Beaulieu missed her flight.

Martin Berthiaume and his spouse spent a week's vacation in Honduras. On December 26, they waited for the shuttle that was supposed to take them to the airport at 11:30 a.m. But it didn't show up.

At the same time, Mr. Berthiaume received a text message from Sunwing advising that the flight was rescheduled for the evening.

However, on the Sunwing application, the flight was maintained at 2 p.m. A few people from the hotel tried their luck by taking a taxi to the airport. The others trusted the team and stayed a few more hours at the beach. Unexpectedly, at 2:00 p.m. the plane was there, and it left with only about thirty passengers on board.

Three days later, Mr. Berthiaume still has no news from Sunwing despite several contact attempts. In desperation, he resorted to paying $700 per person for a return flight with another company.

THE MINISTER OF TRANSPORT REACTS

The flight delays accumulated at Sunwing due to the recent storm have challenged the federal Minister of Transport, Omar Alghabra, who called the situation "unacceptable".

Hundreds of passengers have been stranded in Mexico after the airline canceled their flight without information on when they could return home.

“The current situation is unacceptable. Canadians must receive the information they need to return home safely. Airlines must also keep passengers informed when it comes to providing a service for which they have been paid,” the minister wrote on Twitter.

18 MONTHS FOR HIS COMPLAINT

A Quebec woman who saw her flight with Sunwing delayed by 33 hours in November filed a complaint with the Canadian Transportation Agency (OTC), but she will have to wait almost 18 months to see her request processed.

“They give us deadlines below 45 days, we had to pay the whole trip in full, which we did. They did not respect their criteria and their limits. And there [OTC employees] tell me 18 months! That does not make any sense ! We lost two full days at our destination. It's theft, it's downright theft, "said Geneviève Demers.

According to the Canadian Passenger Bill of Rights in force since September, you can obtain financial compensation in the event of a flight cancellation or delay of more than three hours, unless the situation is beyond the control of the company.

WHERE ARE THE BOSSES?

In the United States, it is the airline Southwest Airlines which has plunged its customers into chaos for a week by canceling no less than 2,300 flights.

In this case, however, the company's president, Bob Jordan, issued a statement on video apologizing and promising to rectify the situation.

Meanwhile, at Sunwing, there is absolute silence from management. The company did not return calls from the Journal on Thursday.

Sunwing is ranked number 3 in Canada for the number of complaints, after Flair Airlines and Swoop Inc., according to the latest CTA update. The company recorded an average of 8.6 complaints out of 100 flights compared to 3.6 for Air Canada and 2.2 for Air Transat.

1 Seven days in the dark for thousands of Quebecers 2 A good match for Mathurin's confidence 3 The Lions take revenge on the Thunder 4 Convoy of freedom: nearly $ 7 million in compensation... 5 Léger-Le Journal poll: inflation and war torment... 6 The miraculous: she relearns to walk and speak 7 “There is no one who likes to lose” –St-Louis 8 Cash cows again after two lean years 9 RELEASE: The hidden treasures of Bergamo and Brescia... 10 Saint-Hyacinthe: A fire destroys a building 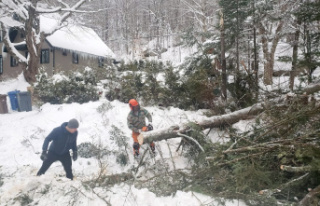 Seven days in the dark for thousands of Quebecers