Gala Sports Québec: Parrot and Charron in the spotlight

Snowboard specialist Maxence Parrot and weightlifter Maude Charron received the two most prestigious titles at the 49th Gala Sports Québec on Saturday, which took place face-to-face at Marché Bonsecours for the first time in two years. 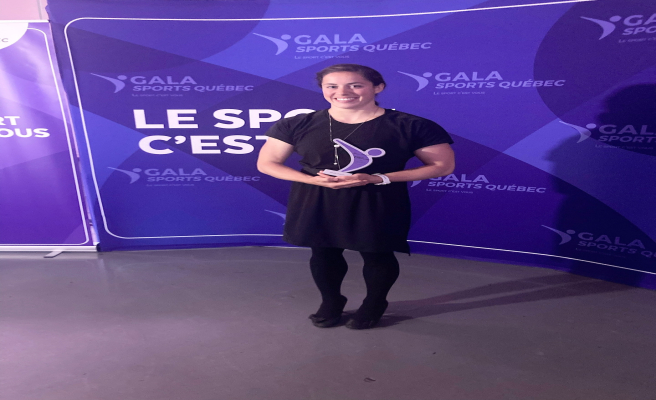 Snowboard specialist Maxence Parrot and weightlifter Maude Charron received the two most prestigious titles at the 49th Gala Sports Québec on Saturday, which took place face-to-face at Marché Bonsecours for the first time in two years.

Yet another sign that the last two years have been turned upside down by the pandemic, the recipients of the male and female international athlete awards have been given to competitors who have participated in the Summer Olympics … and Winter.

There was therefore nothing very normal about this Gala Sports Québec, which also gave the judges a hard time given the large number of athletes in the running.

But, ironically, it also allowed the nominees to reconnect with a certain normality: that of celebrating together the sporting achievements of the past year.

During the evening, hosted by Alexandre Despatie and Yan England, we were able to see retired speed skater Charles Hamelin in deep discussion with the "king of the moguls", Mikaël Kingsbury.

And that's the main reason why Charron, gold medalist at 64 kg in Tokyo, showed up in Old Montreal on Saturday.

"I came first to reconnect with the athletes I had known in Tokyo and had lost sight of after the Games," she admitted, still surprised to hold her Maurice in her hands.

It's been almost a year since the Rimouski woman put this famous gold medal around her neck, which had marked the imagination so much the path she had traveled to obtain it - she had trained in her garage before Tokyo – was outstanding.

“I was not going to the Games with the idea of ​​winning, pointed out the 29-year-old weightlifter. I knew it was a possibility, but I was going for it without putting any extra pressure on my shoulders. The big media wave after, the tributes, it felt good.

“We realize that people don't just follow the performances, but also the stories behind them. And that motivates me even more, ”added Charron, who is aiming for participation in Paris in two years.

Parrot with his son

Parrot was not present to receive Maurice who was celebrating his slopestyle gold medal in Beijing, two years after he was diagnosed with Hodgkin's lymphoma.

The 28-year-old Bromontois is the new father of little Blake and explained his absence in a video, saying that his newborn “currently occupied all of his time”.

Winner of the athlete of the year award in a team sport, hockey player and new Canadian employee Marie-Philip Poulin was also absent.

But not long track speed skater Valérie Maltais, who received the partner of the year trophy.

Along with Ivanie Blondin and Isabelle Weidemann (who accompanied her on Saturday), Maltais won gold in the team pursuit last February, four years after having abandoned short track.

A few hours before the gala, the skater from Saguenay took part in the Grand Défi Pierre Lavoie, along with Weidemann. The two athletes would also return to their bikes after the ceremony.

“When I made the transition from short track to long track, I had a lot of challenges. As an athlete, but also as a person. I moved to Calgary, I started a new sport, with a new team, ”listed Maltais, moved by this tribute.

This category of partner of the year was rather high. The short track relay team that won gold at the last Games – Charles Hamelin, Steve Dubois, Pierre-Gilles Jordan, Pascal Dion and Maxime Laoun – was also in the running.

Her former teammates did not fail to tease her before the award ceremony.

THE WINNERS OF THE 49th GALA SPORTS QUÉBEC

Team of the YearCarabins of the University of Montreal – Soccer H

Even though they ended their cross-country skiing careers in the weeks following the Beijing Olympics, Cendrine Browne and Laura Leclair want to make sure that there will be a female successor to ski in their footsteps.

This is how, over the past two years, Browne and Leclair have reconciled their athletic careers and their personal projects to carry out the Féminaction program, which aims to encourage girls to continue skiing. background.

Because both Browne, 28, and Leclair, 25, have noticed over their years of competition that female cross-country skiers tend to abandon the sport at a young age.

And even as early as adolescence, between 13 and 16 years old. "We want them to discover the different facets of the sport," Leclair explained on Saturday. Not just as an athlete, but as a coach or even as a member of a board of directors. »

“After that, they took me off the team, she explained, and they put more men than women. I had to fight to find my place. I want us to seek some fairness in our sport, which is a problem in several disciplines at the moment. »

To do this, the two girls organize two to three training camps a year for competitive level cross-country skiers, aged between 14 and 17 years old.

A spirit of community

It is not only a question of performance, but also of mentoring, in order to guide certain young people towards the role of coach.

"We really want to create a sense of community, because it's important for them at that age," pointed out the athlete from Prévost.

This post-career project did not prevent the two cross-country skiers from competing in the Beijing Games, where Browne notably set a Canadian record. A feat that, five months later, still makes her very happy.

But the proudest Saturday was Antoine Cyr, friend of Leclair and himself a founder, who saw his beloved dedicate himself body and soul to his two passions.

"That impresses me! I am his biggest fan. There are even other sports that are interested in what they do,” Cyr pointed out.

Former diver Jennifer Abel did not have time to experience the "spleen" that some athletes feel when they retire from sport. And the reason was in his arms, at Bonsecours Market. Five weeks ago, the double Olympic medalist and her husband, boxer David Lemieux, welcomed little Xander, who was sleeping peacefully during the gala opening cocktail. “I had accomplished everything I needed to accomplish in my career and now I have a wonderful baby boy. I really couldn't ask for more," the new mom gushed.

But Abel, 30, hasn't just embraced her new role as a mother since announcing her retirement in November. She also became a Pilates method instructor in the last few months. "But for now, I'm focusing on my little boy," she pointed out. Then we'll see where life takes us. »

Charles Hamelin hasn't had time to get bored since hanging up his skates for good after the World Championships in Montreal in April.

If it is his biography to be published in the fall that occupies most of the time of the new retiree, the former short track speed skater has also traveled a lot. Hamelin, a great fan of F1 - and of Lewis Hamilton - was in Monaco for the mythical Grand Prix a few weeks ago. But no, he could not meet his idol, who also inspired the design of one of his helmets at the Beijing Olympics.

“We would go into the paddocks and they would come out. But Monaco was still incredible! launched the quadruple Olympic champion.

And as if his spring hadn't been busy enough, Hamelin will marry his spouse Geneviève Tardif, in a week and a half.

Gymnast Victoria Woo retired at the age of 24 last fall. It wasn't that the body was no longer holding up, "an impressive fact at my age", but rather it was the head that wanted to take the next step.

That next step was not only to focus on her studies in marketing at Concordia University, but also her gymnastics suit company which she started with her sister Rose, who practiced the same sport.

"For Elegant Woo's, we were inspired by what we liked and disliked when we were gymnasts. We want to make fashion swimsuits, but also ones that highlight the woman's body. »

Which, she recalls, is not always the case in gymnastics, where slender shapes are often preferred.

1 A measure that is not a hit everywhere 2 A third straight final for the Lightning 3 The Roughriders without complex in front of their... 4 Diving: Canadians shine in Calgary 5 Michael Austin leads the Capitals safely 6 Rekindling past pains to better bridge the gap 7 Clara Luciani: dancing and committed songs 8 L'alter ego of Sam Tucker' 9 Francos de Montréal: France D’Amour, as energetic... 10 New book by Réjean Bergeron: a dive into Antiquity

A measure that is not a hit everywhere