Here are the 15 American movies of the summer

After two years of uncertainty, Hollywood studios and cinemas are displaying a sense of optimism as no less than one blockbuster hits the big screen every week this summer.

After two years of uncertainty, Hollywood studios and cinemas are displaying a sense of optimism as no less than one blockbuster hits the big screen every week this summer. After Dr. Strange and Tom Cruise who got the ball rolling, here is the calendar of long-awaited releases... sometimes even for a few years.

• To read also: “Jurassic World: Domination”: five things to know before going to see the film

Set four years after the events of 2018's Jurassic World: Fallen Kingdom, when humans and dinosaurs struggle to coexist and Blue's baby is captured by poachers. The co-writer and director Colin Trevorrow, responsible for the new trilogy, resumes service here and brings together the two generations of scientists including Sam Neill, Laura Dern and Jeff Goldblum in this sixth opus.

Since the Toy Story series raked in no less than US$3 billion at the international box office, it was natural to look into a spin-off film. This is the animated story of Buzz Lightyear, now voiced by Chris Evans, as he seeks to reach Earth after his spaceship crashes on a hostile planet.

We easily remember the excellent Romeo and Juliet and Moulin Rouge! of the inimitable Baz Luhrmann. The 59-year-old Australian is back in force with his interpretation of the King's life. Played by Austin Butler, Elvis Presley is examined here from the angle of his relationship with Colonel Tom Parker, played by an almost unrecognizable Tom Hanks.

Minions 2: Once Upon a Time Gru

Postponed for two years due to the pandemic, here is the great return of the adorable yellow creatures and their "master" Gru. The animated film transports us to the 1970s when the Machiavellian Gru wants to become the leader of the Vicious 6, a group of villains. Fun guaranteed for young and old.

The sexiest Norse god on the big screen was last seen, he had put on a few pounds. He returns to us muscular and ready to fight in this feature film written and directed by Taika Waititi who also thought of including Jane Foster who became Mighty Thor (Natalie Portman) and a villain named Gorr, to whom Christian Bale lends his features.

Fury on Legs: The Legend of Hank

Moviegoers remember The Sheriff is in Jail, a comedy by Mel Brooks released in 1974. Well, know that the screenplay of this animated film is vaguely inspired by it. With its impressive voice cast – Michael Cera, Ricky Gervais, Michelle Yeoh, George Takei and Samuel L. Jackson – Fury on Legs features a samurai dog trained by a cat.

Jordan Peele returns with this horror drama of which, as usual, we don't know much and that's good. The trailer shown at the cinema hints at disturbing phenomena on a California ranch. And in the credits, we find Daniel Kaluuya, Keke Palmer and Steven Yeun.

Obviously, we suspected that the superheroes did not act alone. Here are their best friends – dogs, pigs, turtles and squirrels – who only listen to their courage in order to come to the aid of the masked vigilantes kidnapped by a group of bad guys. You had to think about it and the whole thing is dubbed, in the original version, by Dwayne Johnson, Kate McKinnon, Natasha Lyonne and Kevin Hart.

We've been waiting for Brad Pitt's return for a while – his appearance in The Lost City hardly counting. So here is the actor and producer again in the role of an assassin having to retrieve a suitcase from a high-speed train making the connection between Tokyo and Kyoto. We also meet Joey King, Michael Shannon, Sandra Bullock and Aaron Taylor-Johnson.

The Man from Toronto

The comedy of the summer stars Kevin Hart and Woody Harrelson as Airbnb guests who are mistaken for each other. And when you know that one of them is, in fact, an assassin, you can imagine the possible delusions...

Directed by Baltasar Kormákur (the filmmaker of Everest with Jake Gyllenhaal), this thriller focuses on a widower (Idris Elba) on vacation in South Africa with his two daughters. But the latter fall prey to a lion during a visit to an animal reserve. And Sharlto Copley is also part of the cast.

Sylvester Stallone is the superhero and the producer of this feature film adapted from the eponymous comic. Australian Julius Avery is at the helm of Samaritan, whose filming and release have been postponed due to the pandemic.

Idris Elba and Tilda Swinton star in this film by George Miller, his first since Mad Max - The Road to Chaos. Idris Elba embodies a jinn who offers him the fulfillment of three wishes in exchange for his freedom.

Even if David Cronenberg took the same title as that of his 1970 film, it is in no way a remake, this international production with Viggo Mortensen, Léa Seydoux and Kristen Stewart taking an interest in the mutation of organs. The Canadian filmmaker's remarkable return to science fiction and horror, genres that have established his fame, Les crimes du futur was presented at the last Cannes Film Festival and earned a six-minute ovation.

With its US$200 million production budget, it is the most expensive film ever produced by the platform, which is currently undergoing a budget restructuring. Ryan Gosling is the headliner of this feature film signed by the Russo brothers – yes, the tandem who took over the Avengers after Joss Whedon. The actor plays a mercenary, a former CIA employee and special operations specialist, forced to flee after discovering a terrible secret about the organization. Chris Evans, another Marvel defector, plays the role of Gosling's former colleague who leads the hunt.

1 France votes this weekend in decisive legislative... 2 TÉLUQ and UQAT add two new master's degrees... 3 Beijing postpones reopening of schools after new wave... 4 [LIVE] 108th day of war in Ukraine: here are all the... 5 Prague announces the death of a Czech in eastern Ukraine 6 Zelensky calls for end to Russian blockade of Black... 7 Sherbrooke: the Grandes-Fourches bridge will still... 8 The first Russian passports issued to residents of... 9 Security around secondary schools: the SPVM arrests... 10 CAQ report: what note to give to the Legault government?... 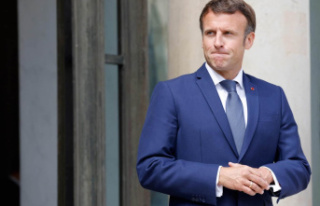