Hiring bonuses of $10,000 to recruit truckers

The largest food distributor in the world takes out the checkbook to put on the table $10,000 hiring bonuses, to recruit the drivers who will help it swallow up its competitors.

The largest food distributor in the world takes out the checkbook to put on the table $10,000 hiring bonuses, to recruit the drivers who will help it swallow up its competitors.

To get the $10,000, you must have completed a probationary period, explains Marie-Claude Pilon, Vice-President, Human Resources – Quebec, alongside him.

"It's an initiative of the Quebec region," says the senior executive, who was able to convince the parent company that the game was worth the candle.

The sequel proves him right. A good dozen drivers have been attracted since the introduction of the $10,000, but the giant would like five times more.

Sysco is the world's largest food retailer with nearly 65,000 employees in 350 distribution centers. The mastodon weighs nearly 58 billion dollars on the stock market.

In Quebec, the giant from Houston, Texas, has its head office in Boucherville, with 125 drivers and 125 order pickers, in addition to having another twenty drivers at its Quebec branch.

With the deconfinement, the crowded terraces have forced Sysco to work twice as hard to satisfy the appetite of restaurateurs. So the American company had to show its teeth to find new employees.

At Sysco, delivery drivers, who earn an average of $30 an hour, don't just drive their vehicles, they also have to unload their cargo at the schools where they will deliver the food.

“We want female candidates. [...] It is not because it is physical work that women are not able to do it. On the contrary, we can see it,” emphasizes Sylvain Boudreau.

According to the Quebec Trucking Association (ACQ), the industry needs 2,000 to 4,000 truckers, a figure that could jump to 10,000 within five years.

“All categories combined, 30,000 positions are to be filled by 2025, including 14,000 positions related to the growth of the industry and 16,000 to retirements”, specifies the big boss of the ACQ, Marc Cadieux.

“You have to make a distinction between an entry bonus and companies that already recognize current inflation. What matters is what remains in the pockets at the end of the year,” he insists, when asked about the attractiveness of hiring bonuses.

At the Association of Professional Truck Drivers of Quebec (ARPQ), its director general, Francis Rouleau, also notes the extent of the overbidding.

For Benoit Therrien, president of Truck Stop Québec, you have to be creative to attract the new generation of drivers.

“Now, even the best companies offer bonuses, because in most cases they have a staff shortage of /-15%,” he concludes.

1 High voltage for a visit to Taiwan 2 Kansas upholds constitutional abortion rights guarantee 3 Pelosi visit: Taiwan “will not back down” in the... 4 Pelosi's visit to Taiwan: Seoul calls for calm 5 Rise in crime and sexual violence according to Statistics... 6 2 shooting murders in Montreal on Tuesday 7 Al-Qaeda, the Taliban and Afghanistan 8 Beirut: two years after the explosion 9 Taiwan: Beijing deploys sanctions and military exercises 10 China: an attack in a kindergarten leaves three dead... 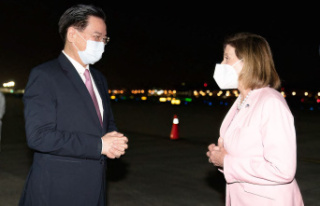 High voltage for a visit to Taiwan