After being humiliated by Greta Tumberg on Twitter, the controversial influencer Andrew Tate was arrested Thursday with his brother in a sex trafficking case in Romania and his altercation with the activist may not have been there for nothing.

After being humiliated by Greta Tumberg on Twitter, the controversial influencer Andrew Tate was arrested Thursday with his brother in a sex trafficking case in Romania and his altercation with the activist may not have been there for nothing.

• Read also: Andrew Tate responds to Greta Thunberg's viral tweet in the form of a video

Andrew Tate, who calls himself a misogynist, and his brother were arrested in Romania on Thursday on allegations of sex trafficking, Romanian newspaper 'Libertatea' reported.

Police went to a villa where Andrew Tate and his brother Tristan were staying on Thursday to arrest the British brothers on charges of kidnapping and rape, court sources told the newspaper.

The brothers allegedly detained two young women, an American and a Romanian, inside the villa against their will in April, where they were allegedly subjected to "physical abuse and mental coercion", reported the 'Daily Mail ".

Betrayed by his video replica

Andrew Tate's arrest may have a direct connection to his conversation with Greta that went viral earlier this week.

The influencer had decided to annoy the environmental activist on Twitter by touting his collection of luxury cars in a post that has accumulated nearly 50 million views.

“I have 33 cars. My Bugatti is equipped with a quad turbo w16 8.0L. My TWO Ferrari 812 competizione have 6.5L v12s. It's only the beginning. Please provide me with your email address so I can complete the list of my competition cars, each with details of their massive emissions,” Andrew Tate tweeted.

The young woman was quick to retort to the influencer, in an equally sarcastic tone.

“Yes, please enlighten me at smalldickenergy@getalife.com.”

More than ten hours after his initial tweet, Andrew Tate offered a response, along with a video.

“Thank you for confirming via your email address that you have a small penis. The world was curious. And I agree: you should buy yourself a life,” the influencer tweeted at the young woman.

Andrew Tate then asks someone off-screen to hand him two boxes of pizza, but reminds him not to recycle it in an effort to provoke Greta Thunberg.

These boxes from a Romanian pizza chain would have potentially let authorities know he was in the country.

“Romanian authorities needed proof that Andrew Tate was in the country, so they would have used his social media posts. His ridiculous video from yesterday featured a pizza from a Romanian pizza chain, Jerry's Pizza, confirming he was in the country. This is absolutely epic,” tweeted Alejandra Caraballo, civil rights attorney and clinical instructor at Harvard Law School Cyberlaw Clinic.

1 The detainee who died in Bordeaux should have been... 2 There is a bit of Quebec in our neighbors to the south... 3 [PHOTOS] 50 Great Artists Who Passed Away in 2022 4 Murder of a police officer in Ontario: one of the... 5 Traffickers closely watched this fall 6 The health network fears hitting a wall 7 A New Year's Day in the water 8 25 Quebecers among the nominees 9 Aleksander Barkov puts on a show against CH 10 Connor Bedard and Canada dominate Austria 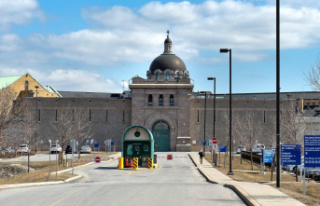 The detainee who died in Bordeaux should have been...