Laurentians: a teenager from Prévost is missing

The Sûreté du Québec (SQ) is asking for the public's help in locating a teenager from Prévost, in the Laurentians, who has been missing since Thursday.

The Sûreté du Québec (SQ) is asking for the public's help in locating a teenager from Prévost, in the Laurentians, who has been missing since Thursday.

• Read also: A 40-year-old loses his life in Montérégie

William St-Aubin Girard, 15, was last seen July 21 around 10 p.m. According to the SQ, the teenager, who would move on foot, could be in Montreal.

“His loved ones have reason to fear for his health and safety,” the provincial police also said.

Measuring 1.88 m (6 ft 2 in) and weighing 70 kg (154 lb), William St-Aubin Girard has blond hair, shaved on the sides. He has brown eyes and a half-shaved eyebrow. At the time of his disappearance, he was wearing black jeans, black shoes and a shoulder bag.

Anyone who sees William St-Aubin Girard is asked to contact the authorities by dialing 911.

1 PGA: Finau wins as Piercy collapses 2 Tour de France: consecration, perseverance and the... 3 MLB: sixth straight win for the Jays 4 Jason Momoa survives a car accident 5 Another hard day at work for the Montreal Alliance 6 Confessions: Martin Lafleur gets involved in the film... 7 Amy Schumer: everything to break taboos 8 Major breakdown: Rogers will invest 10 billion in... 9 French GP: a comforting point for Stroll 10 The Capitals prevail in the rain 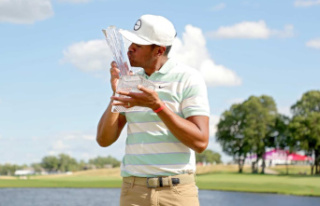