Laurentians: a woman in critical condition after an accident in Amherst

A woman is in critical condition after a violent swerve that occurred Wednesday afternoon, in Amherst, in the MRC of Mont-Tremblant, in the Laurentians region.

A woman is in critical condition after a violent swerve that occurred Wednesday afternoon, in Amherst, in the MRC of Mont-Tremblant, in the Laurentians region.

For some unknown reason, a driver reportedly lost control of his Honda Pilot SUV.

“Around 4 p.m., the police were called to intervene on route 323 north in Amherst, explained the spokesperson for the Sûreté du Québec, Geneviève Gagnon. It is a driver who would have lost control of his vehicle, before swerving into the ditch. There were seven people on board. The disembodiing claws have been requested. There is a woman in critical condition.

Shortly after 7:30 p.m., the SQ spokeswoman was unable to find out how many people were taken to hospital.

An investigator and a collision investigation officer were dispatched to the scene. The road has been closed since 6 p.m. for the investigation. The latter is still ongoing.

1 5 problems to solve at the "Sparrows" 2 Hockey Canada: Maxime Comtois dissociates himself... 3 The new life of Jeanick Fournier 4 Baie-Saint-Paul: let's go for the Festive! 5 Beaten to death for complimenting a little girl 6 Toronto: several hundred Hells Angels expected 7 Public inquiry after a triple murder 8 Inappropriate relationship: charges leveled against... 9 Jimmy Garoppolo can look for a new team 10 Cirque du Soleil: a show that will dazzle the divas! 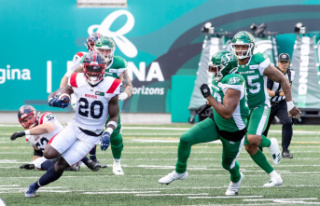 5 problems to solve at the "Sparrows"