The day after Quebec's National Day, it is good to remember that our economy is holding its own thanks to business people who take risks every day to ensure the sustainability of their business.

The day after Quebec's National Day, it is good to remember that our economy is holding its own thanks to business people who take risks every day to ensure the sustainability of their business.

Here are two testimonies of a know-how little known to Quebecers.

A Lanaudière entrepreneur who for 35 years has been building the biggest stages on the planet for the Lady Gaga, KISS and Celine Dion of this world has beaten his competitors by innovating.

"Indians tried, it didn't work. Americans tried to make a big scene, it collapsed. The Europeans, there are some who try, "breath Yvan Miron, CEO and founder of Stageline, at L'Assomption.

“The strength of our concept is that from the beginning, I based it on building codes. I was the only one doing that,” he says.

Founded 35 years ago, the Lanaudière mobile stage manufacturer Stageline has succeeded in imposing Quebec know-how around the world through tenacity and innovation.

“Money has never been a determining factor for me. When I developed Stageline, I did it with my own funds. I believed in it, ”says Yvan Miron, measuring the path traveled.

Since his very first scenes, the big boss of Stageline has not been afraid to innovate.

As soon as a glitch appeared, he corrected it. As a result, after thirty years, he has a good head start on his competitors, who simply cannot keep up with him.

Each show is an opportunity to improve the product. About fifteen people work full time in the innovation team.

“I made a mistake when I was young. I exhibited the equipment before applying for a generic patent for the concept, but that's okay, it didn't stop us from living our lives well, "says Yvan Miron in passing.

Never mind, the company has managed to set the pace. Just about every show big and small in North America has Stageline stages.

Today, Yvan Miron is the largest shareholder in the company. The Fonds de solidarité FTQ is a shareholder, as is Roynat Capital of Calgary.

More than 90% of its turnover comes from outside Quebec, including nearly 70% from the United States. "Quebec is not a big playground," he admits, smirking.

When asked what is the biggest challenge facing Quebec entrepreneurs, Yvan Miron spontaneously talks about the lack of manpower.

“Over 90% of the labor pool at the manufacturing level stays in Lanaudière. I always wanted to protect that,” he explains.

During the Journal's visit to the factory on Thursday, Yvan Miron was proud to present his employees with state-of-the-art machinery, which Quebec companies do not always have on the factory floor. .

“Quebec has still been late in the digital shift. He still is. People don't like to hear that," he points out.

But according to him, the current government understands these issues.

Unlike Stageline, more than 61% of SMEs do not believe that the Quebec government understands the impact of this issue on businesses, according to the Canadian Federation of Independent Business (CFIB).

For over 40 years, Pierre Lemieux has given new life to old cast iron heaters. A unique Quebec know-how that is healthy for the environment and that employs a dozen artisans from Saint-Jean-Port-Joli.

It was the beauty of these heaters, often more than a century old, that led Mr. Lemieux to take an interest in them. We will therefore not be surprised that he chose to settle in this municipality of Chaudière-Appalaches renowned for its artists.

“Each radiator is a work of art in itself,” emphasizes Pierre Lemieux.

Over the years, the company he founded, Ecorad, has restored thousands of radiators in Quebec, the rest of Canada, the United States and even Europe. His annual income reaches some $1.5 million.

“Getting rid of a radiator creates 40% of its weight in greenhouse gases. And we need to create even more to replace it. Reusing an existing radiator is much more good for the planet than buying a new product,” says Lemieux.

Two years ago, Ecorad gave itself the means to achieve its ambitions by having new facilities built, which enabled it to bring together under one roof activities that were previously scattered in three different locations.

The building consists of a spectacular wooden structure made by Art Massif, another Saint-Jean-Port-Joli company.

Surprisingly, a decision by the former US administration of Donald Trump had an impact on Ecorad. The reduction in environmental standards on lead has enabled companies to repair radiators without having to comply with the same protocols as those adopted by Ecorad for years.

The Quebec company still continues to find several customers south of the border. Since 2017, the company has had a warehouse in Connecticut, where it keeps thousands of radiators for future customers.

Although he has lost none of his passion, the entrepreneur, now 72, is slowly starting to think about the next stage of his life.

"I'm looking for a replacement," he slips.

1 The Marten, perched on the Haute-Gaspésie 2 Saint-Bernard Island, jewel of Châteauguay 3 Abortion: a judgment worthy of the Taliban 4 Is Justin Trudeau capable of leading the country? 5 A sad and alienating globalization 6 François Paradis: lobster... with a croque-monsieur! 7 My Quebec is open and welcoming 8 Why Québec solidaire is not taking off 9 From Adélard-Desrosiers elementary school to the... 10 In tune with your passions 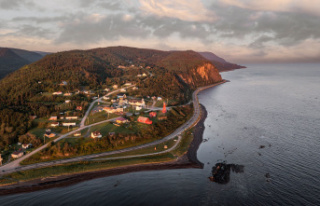