The United Kingdom said Thursday it was “gravely concerned” after the announcement of the death sentence by pro-Russian separatists in Ukraine of two British fighters who had joined the Ukrainian forces.

The United Kingdom said Thursday it was “gravely concerned” after the announcement of the death sentence by pro-Russian separatists in Ukraine of two British fighters who had joined the Ukrainian forces.

• To read also: “No risk of attack on Kyiv at the moment”, according to the Ukrainian Minister of the Interior

“We are obviously seriously concerned. We repeat that prisoners of war should not be exploited for political reasons,” said a spokesman for British Prime Minister Boris Johnson.

The Britons Aiden Aslin and Shaun Pinner and the Moroccan Brahim Saadoun, taken prisoner in Ukraine where they were fighting for kyiv, were sentenced to death on Thursday for mercenary action by the justice of the separatist authorities in Donetsk.

"According to the Geneva Convention, prisoners of war benefit from immunity from combat and should not be prosecuted for their participation in hostilities", denounced Downing Street.

“I strongly condemn the sentencing of Aiden Aslin and Shaun Pinner held by Russian proxies in eastern Ukraine. They are prisoners of war. This is a sham judgment without any legitimacy,” British Foreign Minister Liz Truss posted on Twitter.

The three defendants will "appeal", the lawyer for one of the three men told the official Russian news agency TASS.

Russia for its part claimed this week to have killed “hundreds” of foreign fighters in Ukraine since the start of its offensive on February 24, managing according to it to stem the flow of newcomers.

1 The body of a woman found in the Saint-Charles River... 2 5 soldiers killed in a plane crash in California 3 Household debt worries the Bank of Canada 4 LeBron James wants to buy a team in Las Vegas 5 The Blue Jays' best prospect is coming 6 Ukraine has exhausted all its weapons and is totally... 7 Five firearms seized and two individuals arrested... 8 Medical assistance in dying bill will not pass 9 The “green plants” deputies have done little work... 10 Financial assistance to the SPVM to fight against... 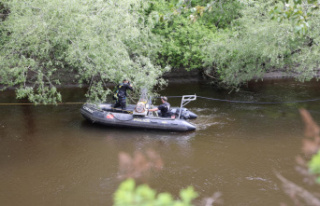 The body of a woman found in the Saint-Charles River...