• To read also: A 42-year-old grandmother without a license dies tragically on a motorcycle

• To read also: [PHOTOS] Accident in Montérégie: a motorcyclist rests between life and death

The spine fractured in two places, five broken ribs, damage to the liver, kidney, lungs, bladder and spleen; Olivier Meunier was in a pitiful state when he was taken to hospital on May 11, after his accident.

That day, the 23-year-old was going to Quebec on a motorcycle. In order to get gas, he headed for Madrid, which is exit 202 of Highway 20.

“It was my mistake, I leaned my bike too much, I think. I was driving at around 110 km / h and I slipped on the garnotte, ”recalls the one who has practiced this sport since he was 17 years old.

The motorcyclist was lucky despite everything, since a motorist witnessed the whole scene.

This good Samaritan therefore had the reflex to stop and go to lend a hand to Mr. Meunier.

"I would probably have died there if he hadn't come to help me because from the road, you couldn't see my motorcycle or me," said the man who was thrown about four meters from his vehicle.

He spends his days almost lying in bed, unable to sit up any longer.

As his spinal cord was affected, but not severed, the road will be long to learn to walk again.

At least six months of rehabilitation will be necessary, believe his doctors.

Since his accident, Olivier Meunier thinks a lot about his best friend, Marc-André De Tonnancour, who died last September after a motorist cut him off in Montreal.

“We were two experienced, we have done motorcycles in our lives, he says. Basically, you realize that it can really happen to anyone. I always told myself that I wouldn't screw up, I've always been confident. But there, I planted myself, and solid. »

Due to his condition and various hospital directives, the young father was unable to see his children for almost a month. It was finally last weekend that a nurse, touched by her story, granted her special permission.

"When I saw their little face, I burst into tears," he admits. It made me feel so good to see them. They were so cute, they were afraid of hurting me, they were gentle with me. »

A situation not to relive

Despite his great passion for this sport, the construction entrepreneur has no intention of getting back on a motorcycle one day.

All aspects of his life are affected by his accident, explains the one who has to look for subcontractors from his hospital bed so as not to disappoint his customers.

But, above all, Olivier Meunier refuses to run the risk of reviving this appalling situation for his young children.

In the meantime, Marie-Pierre, 4, will not be able to be accompanied by her dad for her first visit to school, which will take place soon. His little brother, Mavrik, 3, will have to wait a few months before he can jump into his dad's arms again when he comes to pick him up from daycare.

1 More than 1,000 dead or injured by bullets in four... 2 A pastor tired of having a funeral 3 An upcoming debate on the charter, says Jolin-Barrette 4 Hospital changes approach to victims 5 Tom Thibodeau: A star coach linked to La Pocatière 6 "The best captain in my life" - Vasilevskiy 7 Travel with your hands on the handlebars 8 Up to $50/h to wait in line in front of the passport... 9 France at the polls for decisive legislative elections... 10 Young people and the labor shortage 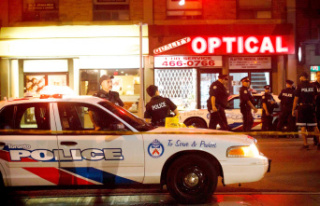