“Our best start in a long time” –Nick Suzuki

Jake Allen, Nick Suzuki, Jake Evans and Martin St-Louis gave similar speeches. All three players and the head coach were talking small moral victories after another setback, a seventh in a row, 4-1 to Rangers. According to the captain, the CH played a very good first period despite a drought of more than 16 minutes without any shots.

“Our start was very good, our best in a long time. Total shots are not as important as the time you spend in the opposing zone. We wanted to get off to a better start and we did. »

The Canadiens have their own advanced statistics department. According to the naturalstattrick site, the Habs had eight dangerous chances to score against five for the Rangers. But we do not have too many memories of the famous eight chances.

"If you look at the advanced stats, I looked at them soon after the game, I think the odds were 15 to 15. I would take that every game. I think we could have thrown more, but sometimes we tried to make the perfect play, one pass too many. Our 18 or 19 shots [18] doesn't tell the whole story. For the chances of scoring, I think we focus a lot on getting back on track. Today is a sign of commitment from the players on what the task was. And we will continue to work on this while trying to progress elsewhere. We're going to take our time because we need to sort this out. »

For the second year in a row, Nick Suzuki will represent the Canadiens in the All-Star Game which will take place February 3 and 4 at the FLA Live Arena in Sunrise.

"It's an honor to go back. I'm excited. But I want to focus on my team and our season. »

1 Volkswagen is betting on locals to shine in Las Vegas 2 Another boost from Quebec for the co-founder of the... 3 Their property at risk from rising interest rates 4 RELEASE: GameFi Rising Star of 2023: Bless Global... 5 Flexibility at work, favorable to the economy and... 6 The Ibex 35 falls 0.1% at the opening, with 8,600... 7 Energy surge: Shell to pay $2 billion in windfall... 8 Saint-Laurent: one injured after a stabbing 9 Unpaid overtime: CIBC agrees to pay $153 million to... 10 Emmanuel Macron unveils his plan for a French health... 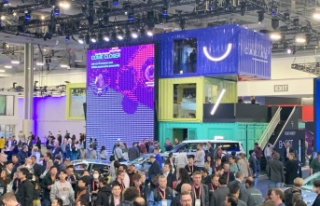 Volkswagen is betting on locals to shine in Las Vegas