Police everywhere, diversity of subjects nowhere? There are too many thrillers in the TV fiction broadcast by the public service, complains a union of directors, who denounces a "cultural impoverishment" for the benefit of the audience.

Police everywhere, diversity of subjects nowhere? There are too many thrillers in the TV fiction broadcast by the public service, complains a union of directors, who denounces a "cultural impoverishment" for the benefit of the audience.

“Imagine a cook who goes to work in a restaurant where he is told to only cook pasta. He will feel frustrated, even if pasta is good and a lot of people want to eat it, ”says Laurent Jaoui, president of U2R, which brings together 130 directors.

According to a report published Friday by the union, 85% of TV dramas broadcast by the channels of the public group France Télévisions in the first and second part of the evening last year belonged to the detective genre. Significantly more than TF1 (11%), Arte (3%) or M6 (1%).

"The cultural contribution of the public service, which should be essential, has been extremely impoverished under the pretext of hearing", estimates Mr. Jaoui, by claiming more fictions "historical, societal or based on the literary heritage".

"When we ask why favor the thriller, we are told: It's simple to do, cheaper and people always ask for it," he continues.

This observation is not new. It has been drawn up several times in recent years by the CSA (now Arcom).

In a 2019 report, the CSA noted, however, "efforts to diversify the themes addressed in the police fictions" of France Télévisions, citing a work whose plot took place in a psychiatric hospital or another tour at the Louvre museum.

But the U2R draws the opposite conclusion. “The thriller has contaminated the other genres”, judges Mr. Jaoui. “Even when we do a series on announcers, on a philharmonic orchestra or a women's basketball team, we ask that there be a murder”.

“However, it is not inevitable. When we see certain subjects being done on TF1 or the platforms, like Disney with Oussekine [on the student killed by the police in 1986], we say to ourselves: what is the public service doing? “, he concludes.

France 2 and France 3 have carved out successes with series belonging to the detective genre, such as "Capitaine Marleau", "Candice Renoir" or the "Meurtres à..." collection. For its part, TF1 is crushing audiences with the police comedy series "HPI", the second season of which started in mid-May. 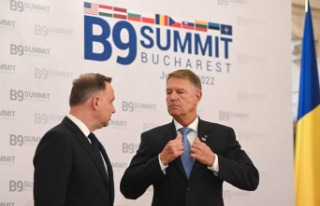 Ukraine: nine countries want a reinforcement of the...