A violent pimp and rapper was handed a heavy eight-year prison sentence today, in addition to having to repay some of the money he made on the backs of his two victims, bringing relief to the one of them.

A violent pimp and rapper was handed a heavy eight-year prison sentence today, in addition to having to repay some of the money he made on the backs of his two victims, bringing relief to the one of them.

"I know that I will surely not be reimbursed, but just that it was requested, it may help other victims to be reimbursed", confided today Mélissa Goyette, relieved after the pronouncement of the sentence, at the Saint-Jérôme courthouse.

The 29-year-old has asked for the court order that protected her identity in the case of her pimp, Vladimir Orestil, to be withdrawn.

In addition to his incarceration, the 41-year-old man will have to return a total of $ 52,500 to his two victims upon his release.

If he fails to pay this debt in four years, he will be sent back to jail for 18 months.

Last summer, the rapper pleaded guilty to charges related to pimping, including that of having lived on the fruits of the prostitution of two women, aged 19 and 24, in 2012 and 2019.

He also admitted to sexually assaulting and assaulting one of them, and threatening to kill the other.

Orestil then maintained relations with them, and therefore claimed not to be their "pimp". He forced them into prostitution and controlled even the underwear they wore. According to the evidence, he lived on their earnings.

It was even revealed in court that the one who calls himself “Oma” financed his rap album in 2019 with this money.

“I am very satisfied, especially with the reimbursement. It is still major and quite rare, commented Me Stéphanie Gilbert, Crown prosecutor. The judge said it: crime does not pay. You are not supposed to get rich because you commit crimes. Here is an example. »

♦ The Crown had asked for a 10-year prison sentence and reimbursement of $125,000. The defense had suggested a sentence of three years, without any compensation.

1 Nick Suzuki among NHL stars 2 RELEASE: Tech4Nature project to study the impact of... 3 Val-Alain snubbed for donating residential land 4 World Juniors: a second consecutive gold medal for... 5 A seventh straight loss for the Canadian 6 A third consecutive defeat for the Armada 7 David La Rue back in the World Cup 8 Difficult day for Quebec sprinters 9 “Live”: a journey through time with Sylvain Cossette 10 Connor McDavid joins Gretzky, Lemieux and Orr 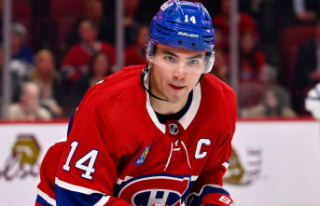