All that remains today are the foundations of some houses that can be seen at low tide in the spring, when the level of the lake is at its lowest.

Many objects, left behind by the occupants, have been recovered by researchers from this forgotten treasure.

It was a move that was not smooth. “The villagers rose up, some armed with their simple farmer's pitchfork. It was inconceivable, for the time, that wealthy Anglo-Protestant companies touch the cemetery of faithful Catholics, ”underlines Roger Villeneuve, vice-president of the Network of organizations of Lac-Kénogami (ROLK).

In total, there were two rises (1905 and 1924-25) that engulfed these farm buildings under 32 feet of water. Some houses had to be moved, others burned or dismantled. The heart of the village was moved twice during these operations.

The church, itself rebuilt after the first enhancement, remains the only visible remnant of the old village of Saint-Cyriac. "We literally killed a village," says ROLK president Sylvie Brassard indignantly.

No one has forgotten this piece of history in the small municipality of Lac-Kénogami. It is this story that recently led to the formation of ROLK, an entity that brings together some fifteen non-profit organizations in the sector. Together, they want to bring the history of this village to life.

Presented under the theme Saint-Cyriac out of the waters, the project consists of developing an interpretation offer of the history and heritage of Lake Kénogami and the former village of Saint-Cyriac.

In particular, we want to present a permanent exhibition and a digital route where we can see, virtually, what the village was like before it was abandoned.

Significant restoration work will also be carried out to strengthen the external structure of the chapel.

Important festivities are therefore in preparation to mark the 100th anniversary of the disappearance of this village and agricultural land under water.

“No one should forget,” says Isabel Brochu, project officer. The chapel of Saint-Cyriac has become a beacon for the community of Lac-Kénogami to the point of becoming the strategic axis of the development plan for the Cyriac heritage site.” 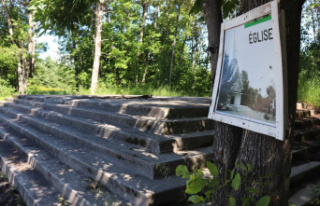