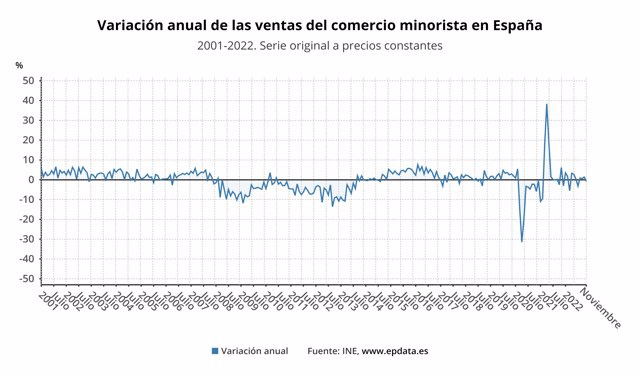 Retail trade registered a 0.8% decrease in sales in November in relation to the same month of 2021, which is 2.3 points below that of the previous month, as reported this Thursday by the National Institute of Statistics ( INE).

With the data for November, retail trade sales return to negative rates after chaining three consecutive months of positive year-on-year rates after the 3.2% decline experienced in July.

In November, sales of food in the retail sector fell by 4% compared to the same month in 2021, while those of other products increased by 0.4%, mainly due to the rebound in sales of personal equipment ( 3.9%) and other goods (0.5%).

For their part, sales of household equipment fell by 4.9% year-on-year.

Stripping out seasonal and calendar effects, retail trade invoicing fell by 0.6% in November, a rate 1.6 points lower than that registered in October.

In monthly terms (November over October), retail trade increased its sales by 3.8% in the seasonally adjusted series, a figure 3.4 points higher than the previous month.

With the advance of November, retail sales add up to four consecutive months of monthly increases.

By products, sales of food fell 0.2% in November in relation to the previous month, while those of other products rose 5.9%, with increases of 3% in sales of other goods, of 0.7% in household equipment and 0.2% in personal equipment.

All modes of distribution presented positive monthly rates in November except for single-location companies, which registered a fall of 0.7%.

EMPLOYMENT SLOWS ITS GROWTH RATE TO 0.9%

As regards employment, the sector recorded a year-on-year increase in employment of 0.9% in November, a rate six tenths lower than that of October.

With this rebound, employment in retail trade has now accumulated 19 consecutive months of year-on-year increases.

The greatest year-on-year increase in employment is observed in service stations (2.3%) and in large chains (2.3%), followed by single-location companies (1.4%) and large chains (1.4 %).

In contrast, large stores have reduced their staff by 1.2% in the last year.

In monthly terms, employment in the sector fell by 0.1%, highlighting the drop in occupancy at service stations (-1%) and in large chains (-0.9%).

SALES DOWN IN TEN COMMUNITIES

Likewise, sales fell in the annual rate in 10 autonomous communities in November and rose in seven.

For its part, employment rose in the annual rate in eleven autonomous communities in November, with the Balearic Islands registering the greatest increase (5.6%), followed by the Canary Islands (4%) and Extremadura (3.8%).

1 A world tour of good news 2 My worst mistake of 2022 3 G7 urges Taliban to reverse ban on women in NGOs 4 Israel: ex-Intelligence Minister Eli Cohen appointed... 5 Ukraine: the 16 Russian missiles that targeted kyiv... 6 The Ibex 35 registers a slight rise of 0.08% in the... 7 China reopens borders on January 8 as fears grow that... 8 Return of Netanyahu, head of Israel's most right-wing... 9 Putin-Xi Jinping interview scheduled for Friday by... 10 Washington approves the sale to Taiwan of anti-tank... 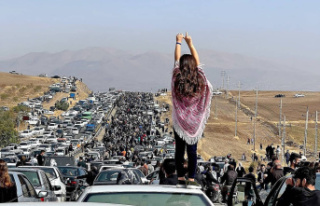 A world tour of good news