“Revenge”: a New Yorker in Texas

You must know B.

You must know B.J. Novak. Not necessarily by name, I grant you, but you saw his face and could appreciate his caustic humor on television in “The Office” – of which he, moreover, wrote and directed episodes –, “The Newsroom “, or even at the cinema in, pell-mell, “The Commando of the bastards”, “Save Mr. Banks”, “The Founder”, or even “The Extraordinary Spider-Man 2”.

“Vengeance” is his new baby that he produced, wrote, directed and in which he plays the main role of Ben Manalowitz, a New York journalist who wants to break into the world of podcasts.

Ben is the typical New York intellectual with this acerbic and disillusioned humor as well as this kind of contempt for others, because he is aware of his superiority since he lives in the center of the world. With his friend John (John Mayer), he gargles with ready-made expressions and pseudo-philosophical reflections when commenting on the women they sleep with. But then, in the middle of the night, Ben receives a phone call from Ty Shaw (Boyd Holbrook whose fake air of Alexander Skarsgård is not at all unpleasant) who tells him that his sister, Abilene (Lio Tipton) has been found dead.

Abilene is one of Ben's countless one-night and two-night stands, but the young woman tricked her family into thinking he was her lover...hence the phone call. Taken aback by the pressures of Ty, Ben jumps on the first plane to Texas where he meets the family of his alleged sweetheart (J. Smith-Cameron whose game we appreciate in the formidable series "Rectify" and "Succession" embodies the matriarch of the Shaw clan).

Ty explains to Ben that he is convinced that Abilene was murdered and the journalist takes the opportunity to put together a podcast that will follow his informal investigation and during which he will notably meet Quinten Sellers (Ashton Kutcher), the musical producer of 'Abilene.

As you can imagine, a New Yorker among libertarian “rednecks”, great firearms enthusiasts, can only lead to skirmishes and other particularly sarcastic observations, especially in this post-Trump era. The "Vengeance" is perhaps not only that of the characters, but also that of these two Americas, now separated by an economic and ideological chasm that it is perhaps, at least according to B.J. Novak, possible to fill. .. a little. 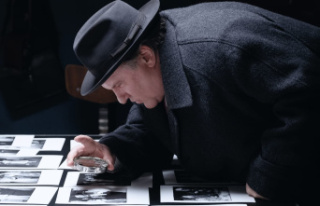