Rouyn-Noranda–Témiscamingue: a CAQ candidate withdraws after only two days

Barely two days after announcing that she would wear the colors of the Coalition avenir Québec in Rouyn-Noranda–Témiscamingue, Claude Thibault finally withdrew her candidacy.

Barely two days after announcing that she would wear the colors of the Coalition avenir Québec in Rouyn-Noranda–Témiscamingue, Claude Thibault finally withdrew her candidacy.

In a brief press release, the Coalition avenir Québec mentions that it is “for personal reasons” that Ms. Thibault informed the party that she preferred not to be a candidate in the election.

“The Party takes note of this decision by Ms. Thibault. No interview will be granted on this subject, ”we can read.

A CAQ ad featuring Justin Trudeau's former Liberal candidate was posted on the web on Wednesday, even before his candidacy was officially announced by François Legault's party.

The Rouyn-Noranda–Témiscamingue seat is currently held by Émilise Lessard-Therrien of Québec solidaire, who is seeking a second term from her voters.

1 The Lac-Saint-Jean International Crossing is back 2 It's time for the Commonwealth Games! 3 Jozy Altidore moves to Mexico 4 Wall Street ends July on a high note, its best month... 5 Tourism on the rise in Bas-Saint-Laurent 6 A residential building in flames in Laval 7 Without housing in Drummondville: the City “is not... 8 The door of his accommodation left ajar, the police... 9 Papal visit: place for concrete initiatives 10 Bush medicine simulations for university students 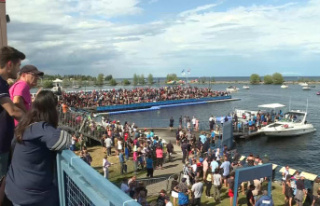 The Lac-Saint-Jean International Crossing is back