Several people were injured on Tuesday afternoon in a shooting that broke out at a bank in Saanich, a suburb of the capital Victoria, British Columbia.

Several people were injured on Tuesday afternoon in a shooting that broke out at a bank in Saanich, a suburb of the capital Victoria, British Columbia.

Saanich police say they responded to a shooting at a bank on Shelbourne Street, corner of Pear Street.

According to her, several citizens were injured, but their number and the severity of their injuries were not immediately specified.

The police arrested two suspects on the spot, but were combing a wide area in search of a possible third accomplice. Saanich police have also asked residents of the surrounding area to lock themselves up at home until further notice.

In addition, some of the businesses and houses surrounding the bank were evacuated due to the presence of a possible explosive device on site, the police said.

1 Madeleine-Bergeron School: Minister Roberge is reassuring 2 After the pope, Marchand wants to receive Macron 3 Tennis: two athletes from here in the running for... 4 Daniel Alfredsson no longer waited for the call of... 5 Walmart sued for turning a blind eye to fraudulent... 6 Wall Street ends at half mast, undermined by household... 7 Zelensky suggests commission of inquiry in Kremenchuk... 8 A cyclist loses his life at the Panoramique de Chicoutimi 9 Homeowners in Saguenay distraught over the contamination... 10 Granby: mistreatment in a CHSLD persists despite a... 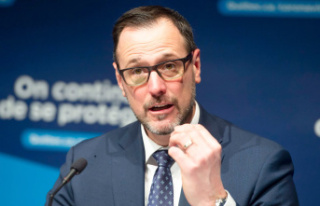