Social Security gains 103,500 affiliates in October, of which nine out of ten were women

The educational sector pulled employment due to the start of the academic year. 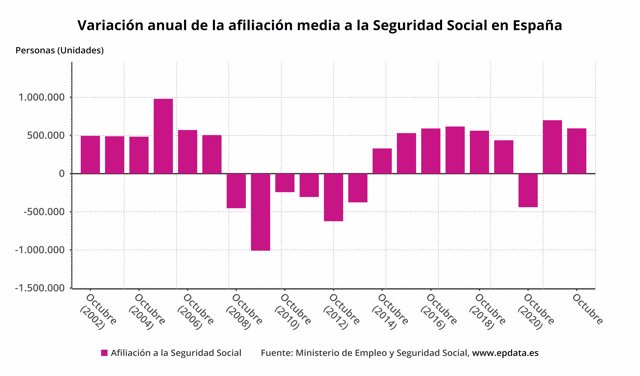 Social Security gained an average of 103,499 contributors in October (0.5%) thanks to women, who concentrated 87% of new jobs, and the education sector, which added more than 139,000 employed by the start of the academic year, according to data published this Thursday by the Ministry of Inclusion, Social Security and Migration.

The rebound in affiliates in October is the least pronounced in this month since the 2017 financial year, when 94,300 jobs were created, although it is in line with the average increase in the years 2017-2019, in which Spain created many jobs.

With the upturn in employed persons this year, the total number of contributors, in average values, stood at the end of October at 20,283,786 people.

In seasonally adjusted terms, the number of Social Security contributors chained its eighteenth consecutive increase after adding 16,095 employed persons (0.08%), to a total of 20,240,450 people.

The Ministry has highlighted that 401,348 jobs have been created between January and October in seasonally adjusted values. Since August 2021, the month in which the pre-pandemic affiliation level was exceeded, employment has increased by 745,198 people.

The Department directed by José Luis Escrivá has emphasized that the behavior of the affiliation in October remained in line with that of the 2017-2019 period, years of "great dynamism" in the labor market.

At the same time, it has highlighted that the average growth in employment in the last three months (August, September and October) has been 43,000 people, above the average of 40,000 newly employed in the 2017-2019 period.

In the last year, Social Security has gained 593,197 affiliates in average values, with an interannual growth of 3.01%, compared to the rate of 3.3% registered in September. This is the lowest year-on-year rate since March 2021, although in October it managed to stay above 3% for the fourth consecutive month.

The Ministry has also highlighted that the job creation process is being compatible with an improvement in its quality thanks to the positive impact that the labor reform is having after ten months in force (seven in full force).

Thus, according to the Department of José Luis Escrivá, in October the increase in affiliates with indefinite contracts accelerated, so that the current number of permanent workers is more than 2.3 million higher than the number existing before the labor reform.

In fact, the Ministry underlines that the percentage of affiliates with a fixed contract stood at 84% at the end of October, compared to the average of 70% for the 2017-2021 period.

At the same time, affiliates with contracts of less than 30 days have been reduced by more than 2.8 million people since the labor reform and the average duration of the contracts that caused dismissal in January or October has increased by 48 days compared to with the 2019 financial year, before the pandemic.

The average affiliation of foreigners, for its part, rose by 6,487 contributors in October, 0.2% compared to the previous month, reaching 2,462,506 employed persons.

Within the General Scheme, Education led the greatest growth in employment at the start of the academic year, gaining 139,157 contributors compared to September (15.2%). It was followed by the Public Administration, which added 18,582 employees (1.6%); construction, with 15,665 new affiliates (1.7%), and artistic activities, which gained 14,069 contributors (5.1%).

In contrast, the end of the summer campaign led the hospitality industry to lose 54,695 affiliates (-3.7%) and to lead the decreases in employment in October. It was followed by health and social services activities, which lost 39,777 employed persons (-2.2%), and administrative activities, with 16,061 fewer contributors (-1.1%).

The Ministry underlines that the growth of affiliation maintains a "remarkable dynamism" in innovative sectors and with more added value, such as computing and communications (18.6%), which shows notable increases in the communities of the Canary Islands (31.4%) , Andalusia (27.7%) and Castilla-La Mancha (26.8%) between February 2020 and October 2022.

Likewise, Social Security points out that, geographically, the increase in the level of affiliation compared to the pre-pandemic period is also generalized, especially in the southern half of Spain. The Valencian Community (6.7%), Andalusia (6.6%) and Murcia (6.3%) stand out.

On the other hand, the Ministry has reported that workers in ERTE for economic, technical, organizational or production reasons (ETOP) stood at 17,351 at the end of October, below the 18,666 of the previous month.

The Ministry has also indicated that one in two ERTE workers is partially suspended. 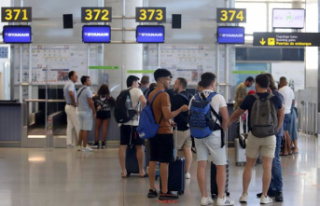