SPVM | Investigations: the Journal behind the scenes of the gun fight

Behind the arrests of bandits and the searches for firearms, many specialized teams work in the shadow of the investigators to fight against armed violence in Montreal. 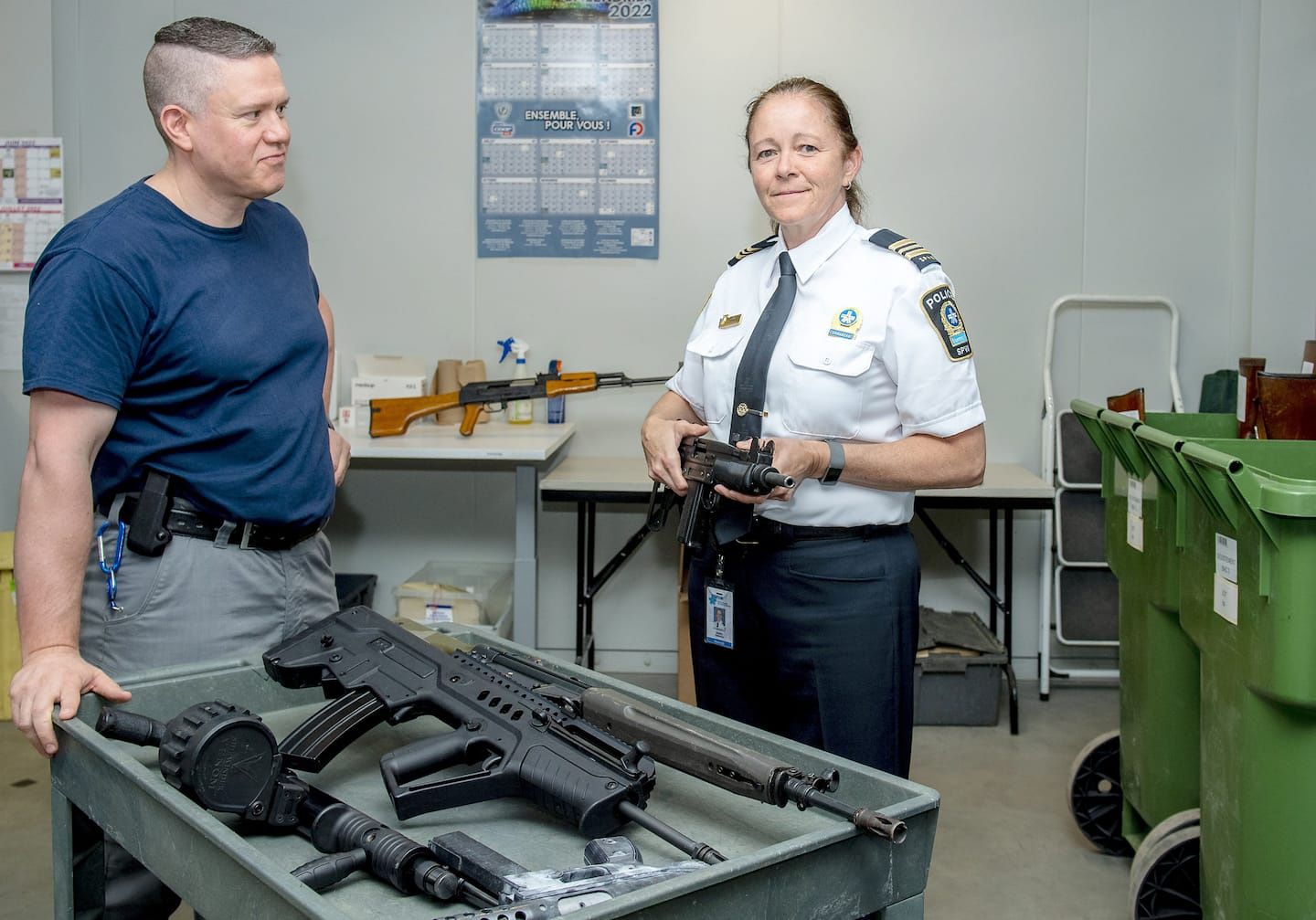 Behind the arrests of bandits and the searches for firearms, many specialized teams work in the shadow of the investigators to fight against armed violence in Montreal. Cyber ​​investigation, surveillance, forensic identification: Le Journal had exclusive access to the universe of these special units, which work tirelessly to help solve crimes.

"Much of our work is confidential, so we hear little about us," explains Chief Inspector Caroline Cournoyer, head of the Specialized Criminal Investigation Service (SSEC). But if you knew the number of times a day that investigators call our teams. It's a close collaboration. »

Top of the stack

For the past two years, the outbreak of violence in the streets has meant that all files that directly or indirectly relate to a firearm are automatically put at the top of the pile.

“As soon as we have information, we prioritize it, assures Chief Inspector Cournoyer. Both on Saturday evening and in the middle of the night. We wake up our people and make them work. We are present and available to process information in real time. It's always very lively here. »

But how to explain this resurgence of violence which has claimed dozens of victims in recent months? Why do we find teenagers, who do not even have the right to drink a beer or to vote, wounded by bullets or downright dead in the streets of the metropolis?

The trivialization and glorification of weapons are possible answers, believes Chief Inspector Cournoyer.

“It has become a pride to own a weapon, to show it on social networks. In organized crime, before, we bought a weapon to commit a crime. We had a plan. Now we're buying a gun without a plan. We live in the present moment and it is often very impulsive uses. »

Result: instead of shooting two or three bullets to hit the target, the shooters will shoot 20 or 30.

“At that time, we have to do 20 or 30 expertises. It’s a greater workload for our teams and it becomes more complex,” she explains.

Another challenge frequently encountered by support units is that of advancing technologies.

Faced with all the efforts made by major technology companies to make our cell phones and other devices more difficult to hack, SPVM teams must constantly renew their knowledge.

"But they're really, really good," said the big boss, with a smile on her face. Our cyber investigation team often wins awards for their expertise. We have a lot of ways to track criminals, but unfortunately we can't say everything, because otherwise they would find others. »

When a weapon is discovered during a search or at the scene of a crime, it will first be seized by crime scene technicians and taken to their department for an initial series of analyzes. The weapon will then be sent to the Laboratory of Forensic Sciences and Forensic Medicine (LSJML), where even more extensive expertise will be carried out, in particular by the ballistics department, the only one in Quebec. It will then be returned to the SPVM to be stored pending court proceedings.

The Journal was able to enter the vault where the weapons are stored, a room where a handful of people have access and in which no external person had ever set foot.

“Here we have weapons seized awaiting trial, but we also have weapons that citizens had to dispose of following the change in the law,” says Commander Nadine Garneau, responsible for forensic identification.

When all possible analyzes are done on a weapon and the case is closed in court, it can then be destroyed.

“It is the Sûreté du Québec that takes care of the destruction. They will melt them, ”explains the commander.

Some weapons have been in the vault for over 20 years. They are linked to unsolved homicides and investigators hope to one day be able to link them to the killer.

The Intelligence Department is an exceptional tool for SPVM investigators. Those who work there are responsible for, among other things, shadowing, infiltration, wiretapping and several other highly confidential investigative techniques. For obvious reasons, Le Journal was unable to access all units.

The work of police intelligence is interrelated with that of other units and very often, good collaboration can provide irrefutable evidence to investigators.

Let’s take the example of a policeman who would be assigned to a spinning mill. If he saw his suspect throwing his coffee into a trash can, he could quickly notify the forensic identification section, which would come and retrieve the cup. DNA samples could then be taken from the object.

The cyber investigation unit, set up in 2017, is also called upon daily. These members are able to support investigators and patrollers on the road in real time when a computer, cell phone or other electronic device is involved. They can also trace individuals from social networks, cloud spaces or any other information stored on the web.

From 2018 to 2021, they handled 45 times more firearms cases. The resurgence of this type of violence is particularly felt within the department.

In order to demonstrate the extent of their abilities, Detective Sergeant Maya Alieh and her team even drew a portrait of the Journal's representative based on information on the web (with her prior authorization). The amount of personal information uncovered in such a short time was both staggering...and concerning.

SINCE THE BEGINNING OF THE YEAR IN MONTREAL

68 firearm discharges or shots fired at building, vehicle, or other

Criminals also refine their ways to avoid getting caught

Following an invitation from the Montreal police, Le Journal was able to preview everything that happens behind the scenes during an investigation. The specialized units which assist the investigators often have the capacity to unblock the most complex cases.

If equipment is seized during a search, it will be sent directly to the investigating technologies team for analysis. Whether it's a cell phone, a computer or even a drone, experts can recover just about anything, regardless of the medium. However, staff must remain on the lookout for all new existing technologies since some criminals are very cunning. The workload has greatly increased over the past few years. Ten years ago, when a USB drive was seized from a pedophile, it typically contained 5GB of material for analysis. Now, it is not uncommon to find hard drives of up to 14 terabytes at search sites.

Part of their department even looks like a pawnshop office, while VHS and cassette players are available as needed.

This division also has a mobile laboratory equipped to carry out a preliminary search at the location of a search.

“It helps investigators decide whether they want to detain the person or release them based on the evidence gathered. It allows you to quickly start an investigation, ”explains the commander in charge of the unit, Rhéaume Coallier.

In addition, his team is responsible for the 42 cameras installed at strategic locations on the island of Montreal. They record 24 hours a day. During our visit, a young cadet in charge of the lookout even informed her commander that images of a gun crime that had occurred the day before had been captured by the cameras. These may be used in a possible trial.

For the past two years, the number of scenes where bullet holes in cars have to be analyzed has constantly increased. Forensic identification technicians use batons to determine the trajectory of bullets and where the shooter was. It is even sometimes possible to determine the caliber of the weapon quite quickly, although the final expertise is done by the ballistics department of the LSJML. A forensic mechanic works within the team and brings a very specific and rather rare expertise. It is able, in particular, to remove the projectiles stuck in the bodywork without damaging them.

Fingerprinting with various powders is probably the most well-known way to collect DNA since it is frequently shown in series or films. But other more modern techniques now exist.

In the SPVM's forensic identification department, technicians have cyanoacrylate cabinets. On firearms, this technique is more often used since it gives better results.

After inserting the weapon into the cabinet, a few drops of special glue and a little water are added to a container. Within an hour, the oils on the surface of the weapon will be visible to the naked eye or with laser enhancement. The fingerprints will then be photographed, then codified, in order to be sent to the SPVM bank. If no correspondence is found, it may be forwarded to the Royal Canadian Mounted Police, which maintains its own register.

The RCMP national bank was only set up in 2000.

DNA is a fairly new investigative technique in Canada, despite what you might think.

"When I came back in 2005, DNA had to be seen on an object," explains Caroline Simoneau, supervisor of the crime scene detection module. Now, we are easily able to get profiles when we can't see anything with the naked eye. Work techniques have really evolved since the DNA. Before, we didn't worry about leaving an imprint on a stage. If we pulled out the cold cases [unsolved cases], we would have the fingerprints of all the investigators who worked on the file. »

Number of scenes covered by photographers200

Number of suspect identifications by fingerprints250 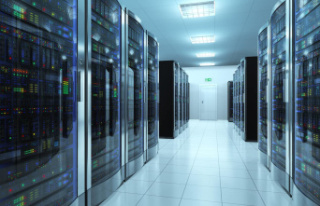 $40,000 Cyberinvestigation at the Department of Finance