The CPI moderated to 7.3% in October due to electricity and gas, but food prices shoot up 15%

The price of electricity falls by 15% in a year, and sugar, milk, eggs, meat, bread and cereals, among other foods, become double digits. 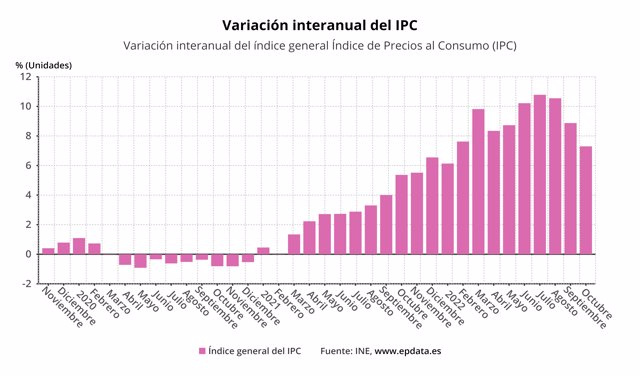 The price of electricity falls by 15% in a year, and sugar, milk, eggs, meat, bread and cereals, among other foods, become double digits

The Consumer Price Index (CPI) increased three tenths in October in relation to the previous month and suddenly cut its interannual rate 1.6 points, to 7.3%, its lowest figure since January, just before the declaration of the war in Ukraine, when the CPI stood at 6.1%, according to final data published this Tuesday by the National Institute of Statistics (INE).

The body thus maintains the interannual figure of 7.3% that advanced at the end of last month, but has cut one tenth, from 0.4% to 0.3%, the monthly advance of the CPI initially estimated.

The inflation rate for October is 3.5 points lower than the peak reached last July, when the CPI climbed to 10.8%, its highest level since September 1984.

With the moderation registered in October, inflation adds three consecutive months of decreases in its interannual rate after it fell three tenths in August, to 10.5%, and in September it decreased 1.6 points, to 8.9% .

According to the INE, the moderation in the year-on-year CPI to 7.3% in October is mainly due to the drop in electricity prices and, to a lesser extent, to lower gas prices. In fact, the housing group moderated its year-on-year rate by more than 11.5 points, down to 2.6%, due to lower cuts in electricity and gas.

Electricity has become 15.4% cheaper in the last year, including the tax reductions applied to the bill, a rate that contrasts with the 60% rebound last August and that also reflects the 'step effect' that occurs when compare the already high rates of October 2021 with those of the same month this year. Discounting the tax cuts, the year-on-year cut in the price of electricity would be 11.5% in October.

Without taking into account the reduction of the special tax on electricity and the variations on other taxes, the interannual CPI reached 7.7% in October, four tenths above the general rate of 7.3%. This is reflected in the CPI at constant taxes that the INE also publishes within the framework of this statistic.

In addition to electricity and gas, the moderation of inflation in October was also influenced by the fact that the prices of clothing and footwear, due to the new autumn-winter season, have risen less this year than they did in the same month of 2021. Thus, the clothing and footwear group cut its year-on-year rate by 2.5 points in October, to 1.4%.

At the opposite extreme, food prices rose again in October. Its rate rose one point, to 15.4%, the highest since the beginning of the series, in January 1994. Particularly noteworthy is the increase in the price of legumes and vegetables, meat, and milk, cheese and the eggs.

Core inflation (excluding unprocessed food and energy products) remained at 6.2% in October, which places it 1.1 points below the general CPI rate.

In the tenth month of 2022, the Harmonized Consumer Price Index (IPCA) placed its interannual rate at 7.3%, more than one and a half points lower than that registered in the previous month. For its part, the monthly variation of the IPCA registers an increase of one tenth.

In monthly terms (October over September), the CPI registered a rise of three tenths, in contrast to the 1.8% increase it experienced in October 2021 and the 0.7% drop in the previous month.

The monthly increase in prices in October responds to increases in the food, clothing and footwear and transport groups, in the latter case due to the higher cost of fuels and lubricants. 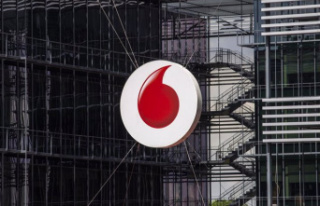