The end of a great career for JJ Watt

One of the greatest defensive players of all time, JJ Watt, has announced he will be retiring after the Cardinals' final two games. 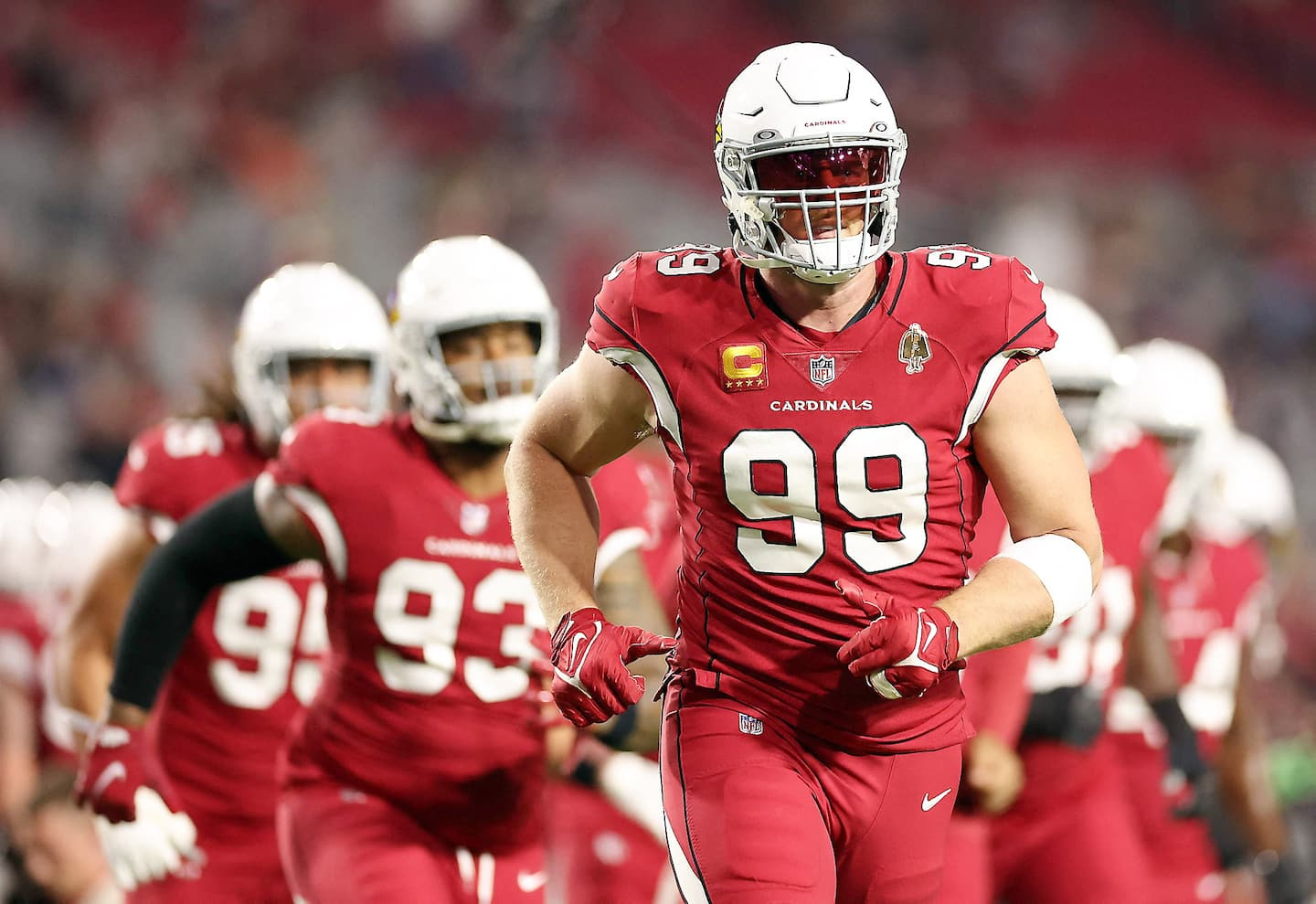 One of the greatest defensive players of all time, JJ Watt, has announced he will be retiring after the Cardinals' final two games. This is the end not only for a great player, but also an outstanding ambassador.

Watt, who made the announcement on his social media, won't be soon forgotten. At 33, in the middle of his 12th season, the Cardinals defensive end has mainly built his legend with the Texans, in his first 10 campaigns.

For a four-year period, from 2012 to 2015, he was probably the NFL's best player in any position. Although he was never awarded the league's Most Valuable Player award because it's an honor too often reserved for quarterbacks, Watt destroyed everything in his path.

In 2012, in his second season, he exploded with 20.5 quarterback sacks. Two years later, he repeated the feat, becoming the first player in history to claim two seasons of 20 or more sacks.

Three times, he was crowned defensive player par excellence. It's a feat that only Lawrence Taylor and Aaron Donald have achieved other than him.

Watt so dominated his era that he would surely have been decorated even more, had it not been for the injuries that sabotaged his late twenties.

That a player like Watt is grandiose is one thing, but that he is equally if not more admired for his human qualities is even more remarkable.

Watt received the highest honor of 2017, NFL Man of the Year. His efforts in the Houston community after a devastating hurricane have been rightly lauded. An impromptu fundraiser ended up raising $37 million.

Unlike others, he never sat on his talent and he always had his team's success at heart. His speeches have always been inspired and inspiring. He is a leader of rare quality. His involvement with young people, among others through his foundation, is admirable.

The NFL has often struggled with some of its athletes when it comes to image. Watt has always been of exemplary righteousness on and off the field.

In five years, he'll move on to an appropriate team for him, with the Hall of Fame Immortals.

In his second year, Micah Parsons already needs no introduction; he established himself as one of the most dominant defensive players on the tour. He's on a mission to clinch the Most Outstanding Defensive Player award, which should go to either him or Nick Bosa of the 49ers. Parsons consistently bothers opposing quarterbacks with a league-high 53 pressures, compared to Bosa's 37. He claims 13 sacks, compared to Bosa's 17.5.

THE STATE OF FORCES IN THE NFL

For the third year in a row, the Bills are division champions. Not only did they show they could run the ball, but they limited the Bears to 80 yards rushing, who were raking in 186.9 per game before the game. Encouraging, at the dawn of the playoffs.

In the loss to the Cowboys, what hurt the most was the loss of tackle Lane Johnson. He could come back in the playoffs, but that's uncertain. The offensive line is probably this team's greatest strength and Johnson is a rock on the right side.

The Chiefs were unspectacular against the Seahawks, but they prevailed in fine fashion playing clean football, committing no turnovers for the first time in 10 games. The defensive front also harassed Geno Smith throughout the duel.

Brock Purdy became the second quarterback to win his first three games by throwing at least two touchdown passes in each of his starts. The other is Kurt Warner, in 1999. This is what we can call an excellent start to his career in the NFL!

The Bengals have made their playoff spot official and remain one of the hottest clubs in the league right now with seven straight wins. It was far from perfect against the Patriots with three turnovers and an average of three yards per carry, but the team is finding ways to win.

The Vikings' absurd season continues with an 11th victory by one possession. Again though, an opposing quarterback, in this case Daniel Jones, looked like Peyton Manning against the porous defense. Sooner or later it will hurt.

On the one hand, the Cowboys defense was exposed against the Eagles, who didn't clear once in the game. On the other side, she made timely turnovers and helped the team close a 10-point deficit in the fourth quarter. Let's go for the glass half full.

The Chargers are back in the playoffs for the first time since 2018. This will allow Brandon Staley to breathe easier. His post-game comments were on point: nothing to celebrate, the Chargers were expected to be in the playoffs and that's just the start.

Life continues to be tough for the Ravens offense without Lamar Jackson, but the team got the job done and still secured a playoff spot for the fourth time in five years. It's not always elegant with the Ravens, but the formula remains effective.

Now Tua Tagovailoa finds himself once again on concussion protocol. It's getting very worrying. Even if he ends up showing no symptoms, the Dolphins will have to be extra careful. Health must take precedence over the race for the series.

The Giants had the game in hand in the fourth quarter against the Vikings, but Daniel Jones threw an interception, a punt was blocked, Richie James fumbled a pass and Cor'Dale Flott mishandled the ball on what must have been a interception. Big implosion!

It's amazing to see the Jaguars at the top of the South Division. It is true that this division is pitiful, but the improvement of the team is still notorious. As recently as Halloween, the Jags went 2-6 and were still the laughingstock of the league.

It is great, the mystery of the Lions! One of the hottest teams in the league allowed the Panthers 321 rushing yards. Yes, yes, 321! Despite everything, the team is still alive and inherits a match against the poor Bears. All hopes are therefore not lost.

Despite the defeat, the Commanders were blessed. The Giants, Lions and Seahawks also stumbled, which has Ron Rivera's team continuing to cling to the last available playoff ticket right now. Everything points to Carson Wentz becoming the starter again.

The Jets suffered a fourth straight loss, their longest such streak under Robert Saleh. Zach Wilson was horrible and replaced by Chris Streveler. What a slap in the face! Mike White is ready to return to the game. The musical chair continues.

Watch out, the Packers are back! If they win their last two games at home against the Vikings and Lions, plus a loss to the Commanders or two losses to the Giants, the cheeseheads will advance to the playoffs. It is far from impossible.

Another duel in which the Buccaneers were painful to see, except in the last minutes when the attack woke up. Tom Brady had two interceptions in a third straight game, his first since the 2002 season.

A few weeks ago, the Steelers went 3-7 and a losing first season under Mike Tomlin seemed inevitable. Things changed quickly. The emotion was palpable following the death of the legendary Franco Harris.

Sunday's duel against the Buccaneers will determine which of the two teams takes control of the South Division. At the start of the season, the Panthers muzzled these same Buccaneers. They aren't flashy, but their ground attack can do some damage.

Again, the Patriots offense slept for much of the game against the Bengals, with just 70 yards in the first half. The alarm clock rang too late. The team is still alive for the playoffs, but at the end of the season, the offensive upheaval will be major.

The Titans are in a sorry rout. Offensively, with Malik Willis, they are even sadder to watch than with Ryan Tannehill, which is saying something. They don't have a receiver who has gained 100 yards or more in their last five games.

The Seahawks' descent continues, but with home games against the Jets and Rams, there is still hope. The fact remains that Geno Smith is less well protected and performs less than at the start of the season. It's good enough that the Seahawks are in this position.

For the first time this season, the Saints have won two games in a row. Their last hopes of earning a spot in the playoffs, however, should come up against the Eagles this weekend. Whether they bet on Jalen Hurts or Gardner Minshew, the challenge will be daunting.

In four games since returning from suspension, Deshaun Watson has led just three of 43 offensive streaks that have led to touchdowns. He was not helped by his receivers late in the game against the Saints, but he still needs to do better. Much better...

Baker Mayfield again showed great things against the usually reliable defense of the Broncos. It wouldn't be surprising if the Rams brought him back next season, even though Matthew Stafford has mentioned he wants to return.

Derek Carr's job security appears to be on the line. Nine of his passes have been intercepted in the past five games. Josh McDaniels casts doubt and risks turning to young Jarrett Stidham. The Raiders lost five games while leading at the half.

The Falcons are officially eliminated. There are some interesting pieces in their foundation for the future like cornerback AJ Terrell, receiver Drake London, tight end Kyle Pitts and runner Tyler Allgeier, but they don't look any closer to being dominant.

It's a painful end to the season for the Cardinals, who no longer have a punch on offense. With their third quarterback, they still held their own against the Buccaneers, but lost a fifth straight game. There will be a lot of work to do during the off season.

Third quarterback for the Colts with Nick Foles, but same disappointing results! The veteran was intercepted three times against the Chargers. He will still return to the fray since Matt Ryan and Sam Ehlinger do not bring anything more. It's sad what this team has become.

The humiliating outing against the Rams led to the firing of Nathaniel Hackett. Many see Sean Payton to replace him, but it is far from certain that he wants to work on rescuing Russell Wilson. Sports Illustrated has cast an intriguing contestant in Jim Harbaugh.

The Bears were nose-to-nose with the Bills for a while before collapsing. They generated three turnovers, but were not very opportunistic, scoring only three points after those big plays. This is the job that comes in the hard way for a young team.

The Texans won against the Titans, so there's no guarantee they'll finish last, which would give them access to the first pick in the draft. There is still reason to believe that they will end with this privilege as a balm for another long season.

1 A painful year on the stock markets 2 A single mother in debt must sell her house 3 Here are this year's least cunning bandits 4 The Raptors fall back to earth 5 “Parapapam”: a magical symphonic vigil 6 Australia: an indigenous “voice” in Parliament... 7 North Korea: Kim Jong Un sets new military targets 8 Russia says its economy will contract by 1% in 2023 9 The price of electricity will drop 63.48% this Wednesday,... 10 Atrys buys the oncology company Initia in Spain and... 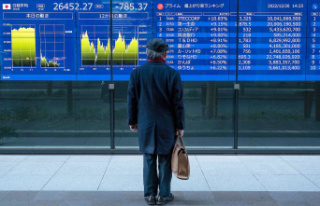 A painful year on the stock markets