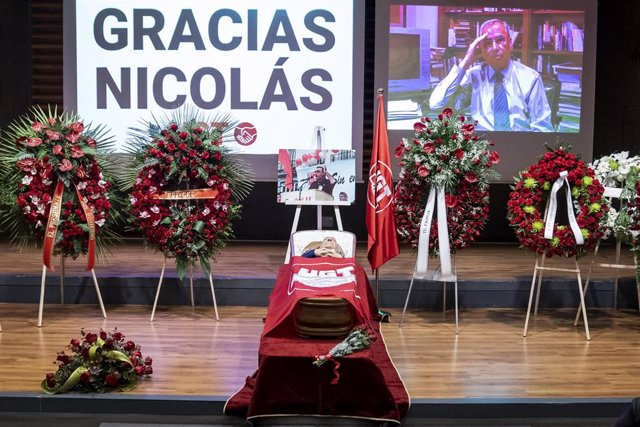 The former general secretary of UGT Nicolás Redondo, who died this Wednesday at the age of 95, will be buried today, around 12:30 p.m., in the Civil Cemetery of La Almudena, in Madrid.

The funeral procession will leave around 12:00 noon from the UGT headquarters in Madrid, where its funeral chapel was installed on Wednesday, attended by different political and union personalities.

The President of the Government, Pedro Sánchez, visited the funeral chapel on Wednesday afternoon, and remembered Redondo as a "historical reference" and "a great Spaniard" who gave voice to the desire for change and democracy.

Sánchez pointed out that the three characteristics that defined the union leader were "the fight, the commitment to the cause of the workers and dignity."

The general secretary of the UGT, Pepe Álvarez, also attended the funeral chapel to bid farewell to "one of the fundamental traces of the UGT and trade unionism in this country."

"He was brave. He always dared to say what he thought and to fight for those things in which he believed. He has been consistent, one of the few people whose consistency has led him to make decisions at key moments in our country," said Álvarez to the media.

On Wednesday afternoon, the general secretary of the CC.OO., Unai Sordo, also came to the funeral chapel, who praised Redondo's work in "forging union unity in Spain", and referred to the "mythical strike of December 14, 1988" against the government of Felipe González.

"He has been a benchmark in Spanish trade unionism in the second half of the 20th century and a man of whom I would highlight his enormous consistency and his own criteria," he added.

Among the personalities who visited the UGT headquarters where the funeral chapel was located, there were also the former general secretaries of CC.OO. Ignacio Fernández Toxo and Antonio Gutiérrez, the former deputy of the Madrid Assembly for the PSOE Ángel Gabilondo, the vice president and spokesman for the Government of the Community of Madrid, Enrique Matías Osorio, or Father Ángel, among others.

The second vice president and Minister of Labor, Yolanda Díaz, commented on Twitter that Redondo left "behind a life dedicated to the defense of working people, freedoms and democracy."

Díaz said goodbye to an "extraordinary trade unionist to whom this country will always be grateful."

For her part, the Government spokesperson and Minister of Territorial Policy, Isabel Rodríguez, highlighted the commitment of the trade unionist and his generation, who did "everything possible" so that today they can enjoy rights and freedoms.

The PSOE also sent all its "affection" to family and friends for the death of a "socialist and man who dedicated his life to the fight for the rights of workers and citizens."

Along the same lines, the socialist candidate for the presidency of the Community of Madrid, Juan Lobato, referred to Nicolás Redondo as a "benchmark for the defense of the rights and dignity of workers" in the country.

The Spanish businessmen also expressed their condolences for the death of the former general secretary of the UGT, a "key person in the Transition, the modernization of the unions and the promotion of Social Dialogue", who contributed to building "a democratic, open and modern country". .

The general secretary of the Spanish Confederation of Business Organizations (CEOE), Antonio Garamendi, agreed that Redondo "helped promote a Social Dialogue that is essential for the stability and prosperity" of Spain.

The historic UGT union leader, who died last night at the age of 95, was the union's general secretary between 1976 and 1994. Born in Baracaldo, Vizcaya, in 1927, he was a historic Spanish unionist and politician.

His father, Nicolás Redondo Blanco, a worker at the Altos Hornos, was already a member of the PSOE and the UGT in 1915, and after the Civil War he was sentenced to death, but his sentence was commuted to 30 years in prison, of which he served six. in El Puerto de Santa María (Cádiz).

At the age of ten, in 1937, he was evacuated along with other Basque children on the ship 'Havana' and taken to Bordeaux (France), where he was picked up by a mining family from Herault of Spanish origin, with whom he lived until 1940. Claimed by his family at the end of the Spanish Civil War, in 1940 he returned to the country. In 1942, he went to the Sestao Navy as an apprentice adjuster officer.

This metalworker joined the PSOE and the UGT in 1945. Thus began a very long union biography, which reached the front line in 1976. He was arrested and prosecuted by the Francisco Franco regime on numerous occasions (up to six times) due to their political and union activities. He was banished to Las Hurdes in 1967.

On April 18, 1976, he was elected general secretary of the UGT at the 30th Congress of the socialist trade union center. Two years earlier he had resigned to lead the PSOE at the Suresnes congress. He was elected PSOE deputy for Vizcaya in 1977, 1979, 1982 and 1986. In 1987 he resigned his seat after voting against the General State Budget (PGE) for 1988. He summoned together with CC.OO. the general strike of December 14, 1988 and two more general strikes in June 1992 and January 1994.

On April 10, 1994, when his son Nicolás Redondo Terreros led the PSE-EE, in the 36th Congress, he gave way to Cándido Méndez as general secretary of the UGT and withdrew from all political and union activity.

1 Iran closes French institute after publication of... 2 Thailand: no Covid test for travelers from China 3 The heads of French and German diplomacy in Ethiopia... 4 Covid-19: China calls on WHO to adopt an “impartial”... 5 Self-image: from one excess to another? 6 My 2023 predictions on the provincial scene 7 Benedict XVI, the philosopher pope 8 The cradle of hockey is tough! 9 I worry about our television 10 RELEASE: Jose Eshkenazi Smeke: North America is consolidating... 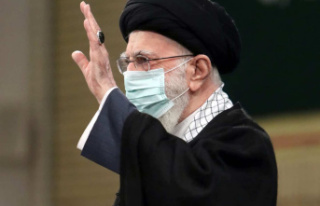