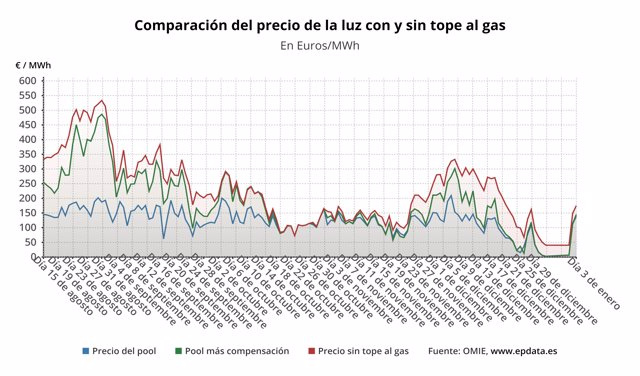 The average price of electricity for regulated rate customers linked to the wholesale market will rise this Tuesday, January 3, to 144.73 euros per megawatt hour (MWh), which represents an increase of 26.7% compared to the 114.24 euros/MWh of this Monday.

This new data confirms the upward trend in the price of electricity since the beginning of this year, after last week the prices collapsed some days below 5 euros and with some time slots even at zero euros.

In this way, the price for this Tuesday will be the highest since the one registered on December 17, when it amounted to 186.73 euros/MWh.

Compensation for gas companies is added to this pool price, which must be paid by consumers who are beneficiaries of the measure, consumers of the regulated tariff (PVPC) or those who, despite being on the free market, They have an indexed rate, which for this Tuesday will be at 5.94 euros/MWh.

In the absence of the 'Iberian exception' mechanism to cap the price of gas for electricity generation, the price of electricity in Spain would be around 175.12 euros/MWh on average, which is around 30 euros/MWh more. than with compensation for regulated rate customers, who will thus pay 17% less on average.

1 Connor Bedard: the goal that would break the records... 2 A year that started badly for Félix Auger-Aliassime 3 The CNMC enables Iryo to operate four new routes to... 4 Health and sleep: how to avoid insomnia 5 “Les Choristes”: 80,000 tickets sold 6 Suzuki and Caufield: a complicity even for mothers 7 Tennis: Martina Navratilova with breast and throat... 8 RELEASE: CGTN: The president of CMG congratulates... 9 Filip Mesar is learning French... and swearing! 10 Kristopher Letang in mourning for his father 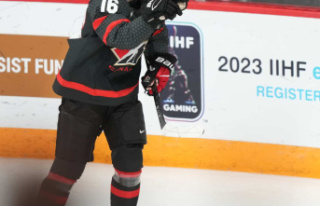 Connor Bedard: the goal that would break the records...