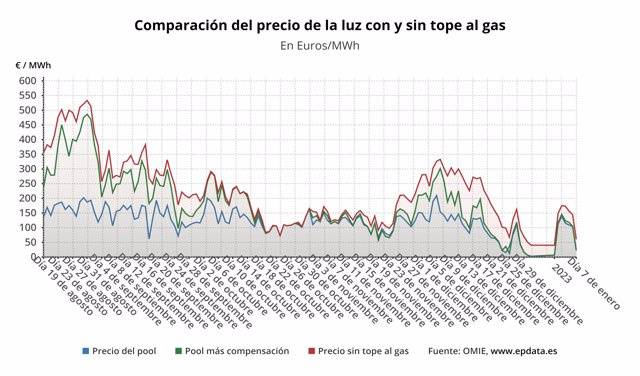 The average price of electricity for regulated rate customers linked to the wholesale market will plummet this Saturday to 22.62 euros per megawatt hour (MWh), which represents a decrease of 78.43% compared to 104.89 euros. /MWh for this Friday.

Compensation for gas companies is added to this pool price, which must be paid by consumers who are beneficiaries of the measure, consumers of the regulated tariff (PVPC) or those who, despite being on the free market, They have an indexed rate, which for this Saturday will be in negative figures (-1.15 euros/MWh).

In this way, in the first week of 2023 the average price of electricity for regulated rate customers linked to the wholesale market stands at 90.98 euros/MWh, 45.67% less than in the same period of the previous year. , when the average price was 167.48 euros/MWh.

In the absence of the 'Iberian exception' mechanism to cap the price of gas for electricity generation, the price of electricity in Spain would be around 51.08 euros/MWh on average, which means 28.46 euros/MWh more than with the compensation for regulated rate customers, who will thus pay 55.72% less on average.

1 The Ibex rises 0.3% in the half session and exceeds... 2 Ukraine: continuation of hostilities despite the Russian... 3 New year in Quebec: he claims to have been injured... 4 Torontonian faces jail for importing gun parts 5 Six losses in a row: nothing goes for the Pittsburgh... 6 NCAA Football: New start for Christian Veilleux in... 7 Sugar addiction: Carla Bruni drank 30 to 40 Cokes... 8 William and Harry: reconciliation seems impossible... 9 Unemployment: little change in employment in Quebec... 10 RELEASE: New Generation of Blockchain-Compatible Digital... 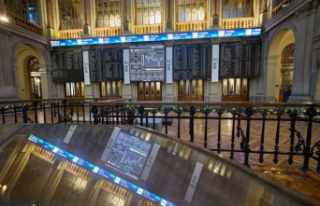 The Ibex rises 0.3% in the half session and exceeds...